Here are fifteen challenging questions for GMAT math practice, with explanations below.  Can you keep the GMAT Quant pace, doing these in under 90 seconds each? Once you’ve got these questions down pat, head over to our full GMAT practice test to practice your skills.

As always, remember there’s no calculator!

Before you work through each GMAT math question, here’s a handy tip for dividing:

1) Let abcd be a general four-digit number and all the digits are non-zero.  How many four-digits numbers abcd exist such that the four digits are all distinct and such that a + b + c = d?

2) Let abcd be a general four-digit number.  How many odd four-digits numbers abcd exist such that the four digits are all distinct, no digit is zero, and the product of a and b is the two digit number cd?

5)  A hundred identical cubic boxes are currently arranged in four cubes: a single cubic box, a 2 x 2 x 2 cube, a 3 x 3 x 3 cube, and a 4 x 4 x 4 cube.  These four are not touching each other.  All outward faces are painted and all inward faces are not painted.  These four cubes are going to be dismantled and reassembled as a flat 10 x 10 square.  The top and all the edges of this 10 x 10 square must be painted, but there is no requirement for paint on the bottom.  How many individual faces will have to be painted to accommodate the requirements of this new design?

6) Twelve points are spaced evenly around a circle, lettered from A to L.  Let N be the total number of isosceles triangles, including equilateral triangles, that can be constructed from three of these points. A different orientation of the same lengths counts as a different triangle, because a different combination of points form the vertices.   What is the value of N?

12) Suppose that, at current exchange rates, $1 (US) is equivalent to Q euros, and 1 euro is equivalent to 7Q Chinese Yuan.   Suppose that K kilograms of Chinese steel, worth F Chinese Yuan per kilogram, sold to a German company that paid in euros, can be fashioned into N metal frames for chairs.  These then are sold to an American company, where plastic seats & backs will be affixed to these frames.  If the German company made a total net profit of P euros on this entire transaction, how much did the US company pay in dollars for each frame?

13) At the Zamenhof Language School, at least 70% of the students take English each year, at least 40% take German each year, and between 30% and 60% take Italian each year.  Every student must take at least one of these three languages, and no student is allowed to take more than two languages in the same year.  What is the possible percentage range for students taking both English and German in the same year?

Explanations for this problem are at the end of this article.

Here are twenty-eight other articles on this blog with free GMAT Quant practice questions.  Some have easy questions, some have medium, and few have quite challenging questions.

2) GMAT Shortcut: Adding to the Numerator and Denominator

13) Practice Problems on Powers and Roots

21) Counting Practice Problems for the GMAT

These are hard problems.  When you read the solutions, don’t merely read them passively.  Study the strategies used, and do what you can to retain them.  Learn from your mistakes! 1) We need sets of three distinct integers {a, b, c} that have a sum of one-digit number d.  There are seven possibilities:

Therefore, for possible values for a & b, we are limited to three odd digits {3, 7, 9}.  We can take three different pairs, and in each pair, we can swap the order of a & b. Possibilities:

Those six are the only possibilities for abcd.

“Eighteen percent of all the cars with back-up cameras have standard transmission.”

This means that the number of cars with BUC must be a multiple of 50.

Then we are told: “40% of all the cars with both back-up cameras and standard transmission are two-door car.”

This means that number of cars with both back-up cameras and standard transmission must be divisible by 5.  Of the three possibilities we have, only the third words.

Thus, the number of 4D cars with both BUC and ST would be

Thus, fourth grade boys taking Mandarin Chinese could take on any value N, such that 74 ≤ N ≤ 128.  Of the answer choices listed, the only one that works is 100.

We could use either the single total box or any of the 24 corner boxes for the four corners of the square.  That leaves 21 of these, and 36 edge boxes, more than enough to cover the 32 edges of the square.  The remaining ones, as well as all 30 face boxes, can be turned paint-side-up to fill in the center.  The only boxes that will need to be painted, one side each, are the 9 interior boxes.  Thus, we have 9 sides to paint. First, let’s count the equilateral triangles.  They are {AEI, BFJ, CGK, DHL}.  There are only four of them.

Now, consider all possible isosceles triangles, excluding equilateral triangles, with point A as the vertex.  We could have BAL, CAK, DAJ, and FAH.  All four of those have a line of symmetry that is vertical (through A and G).  Thus, we could make those same four triangles with any other point as the vertex, and we would never repeat the same triangle in the same orientation.  That’s 4*12 = 48 of these triangles, plus the 4 equilaterals, is 52 total triangles.

7) There are five basic scenarios for this:

If she makes the first four, then it doesn’t matter if she makes or misses the fifth!

Put in the probabilities:

Since all the answers are fractions, change all of those to fractions.  Multiply the first by (5/5) so it has the same denominator as the other products.

8) There are three cases: AABC, ABBC, and ABCC. The area of an equilateral triangle with side s is

Equilateral triangle AOB has s = 12, so the area is

If we subtract the equilateral triangle from the sector, we get everything to the right of the x-axis.

Again, that’s everything to the right of the x-axis, the parts of the circle that lie in Quadrants I & IV.  We just want the part in Quadrant I, which would be exactly half of this.

We don’t have to do all the calculations, but none of the other slope values works.

11) The trap answer is 100%: a percent increase and percent decrease by the same percent do not cancel out.

That’s the price at the end of February.

Add that to the starting amount, $64:

12) The K kilograms, worth F Chinese Yuan per kilogram, are worth a total of KF Chinese Yuan.  The German company must pay this amount.

That is the German company’s outlay, in euros.  Now, they make N metal chairs, and sell them, making a gross profit of P euros.

That must be the total revenue of the German company, in euros.  This comes from the sale to the American company.  Since $1 = Q euros, $(1/Q) = 1 euro, so we change that entire revenue expression to euros to dollars, we divide all terms by Q.

That must be the total dollar amount that leaves the American company and goes to the German company.  This comes from the sale of N metal frames for chairs, so each one must have been 1/N of that amount.

Now, the maximum.  Both the German and English percents are “at least” percents, so either could be cranked up to 100%.  The trouble is, though, that both can’t be 100%, because some folks have to take Italian, and nobody can take three languages at once.  The minimum taking Italian is 30%.  Let’s assume all 100% take German, and that everyone not taking Italian is taking English: that’s 70% taking English, all of whom also would be taking German.  Thus, 70% is the maximum of this region.

14) Let A = Bob eats breakfast, and B = Bob has a sandwich for lunch.  The problem tells us that: 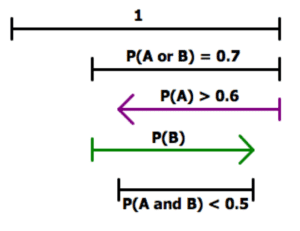 The top line, 1, is the entire probability space.  The second line, P(A or B) = 0.7, fixes the boundaries for A and B.  P(A) is the purple arrow, extending from the right.  P(B) is the green arrow extending from the left.  The bottom line, P(A and B) < 0.5, is the constraint on their possible overlap.