3) Over the course of a full-day seminar, 66 students must give short presentations. Most of the presentations are independent, but Sam’s presentation refers to something in Ruth’s, so Ruth must go before Sam; similarly, Matt’s presentation refers to something in Ruth’s and something in Sam’s, so Matt’s must come after both of those. These three presentations need not be consecutive with each other: whatever the order is, Ruth’s must come before the other two but not necessarily first of the 66, and sometime later, Matt must come after the other two but not necessarily last of all. The other 63 participants can present in any order. How many orders obey these constraints?

4) A bag contains ten marbles of the same size: 3 are identical green marbles, 2 are identical red marbles, and the other 5 are five distinct colors. If 5 marbles are selected at random, how many distinct combinations of five marbles could be drawn? 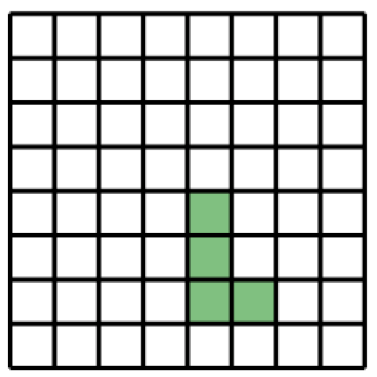 7) A shipping company has four empty trucks that will head out in the morning, all four to the same destination. The clerk has four different boxes to ship to that same destination. All four boxes could go on any one of the trucks, or the boxes could be split up into any groupings and given to the trucks in any combinations (ie. two to one truck, one to another, and one to another). In how many different ways could the boxes be put on the four trucks?

9) Suppose we have six marbles: 3 blue marbles, 2 red marbles, and one green marble. Suppose we are going to put them into three cups: a black cup, a white cup, and a purple cup. The only restriction is that the two red marbles can’t be in the same cup. We could put as many as five (all except one of the reds) in any cup. We could leave one cup empty, or put some in each of the three cups. All combinations are allowed that don’t involve the two red marbles in the same cup. How many combinations are possible?

10) In a certain mathematical activity, we start with seven cards, each with a different prime number written on it. These seven cards are randomly put into three boxes in the following way: one box must get four cards, one must get two, and one gets only one. Then, for each box, we find the product of all the cards in the box, and that’s the “number” of the box. Then, we put those three numbers in order, from lowest to highest, and that is our set. How many different sets can be created from this process?

11) In a certain mathematical activity, we have five cards with five different prime numbers on them. We will distribute these five cards among three envelope: all could go in any envelope, or they could be broken up in any way among the envelopes. Then in each envelop, we find the product of all the cards in that envelope: that is the “number” of the envelope. An envelope containing no cards has the number 1. We then put the three envelope numbers in order, from lowest to highest, and that is our set. How many different sets can be produced by this process?

12) In the diagram below, points A and B are on opposite corners of a lattice consisting of 12 segments. A “true path” from A to B is a path on which no segment is traversed more than once. How many “true paths” from A to B are there? Solutions will appear at the end of this article.

Counting problems on the GMAT

The following blogs cover some of the basic ideas of counting problems:

The first three just cover the basic rules. The fourth, in addition to four hard practice problems, has a discussion of some of the reasons why counting is such a challenging topic. I would refer you to that discussion, and would simply add: if you found the problems above challenging, then read the solutions very careful. The hardest part of a counting problem is often how to frame the problem, how to parse the situation, how to imagine it in do-able stages: once these choices are made, the application of the rules is often quite straightforward. How do you learn how to frame a counting problem? Well, first of all, pay attention to how solutions do this, starting with the solutions below. For more on right brain skills, see this post.

If the related blogs and the solutions here gave you some new insights, please let us know about this in the comments section! 2) Start out by thinking of the four books about Lincoln as one big book. This is one book, and we have six others, so we start by figuring out the arrangements of these seven books. That’s 7!

4) Here, we have to do a combination of listing and calculating. We have to think about several individual scenarios. First, the “three green” scenarios. By “other color”, I mean the colors other than green and red; there are five of these.

Now, the “one green” scenarios:

Now, the “no green” scenarios:

5) This is not really a counting question, in that it doesn’t involves any of the standard counting techniques. We just have think about this logically. No matter what four dice we pick, the lowest roll we could get is a “1” on each of the four dice, for a total of 4. We could get any integer value from 4 up to the highest value. The highest value would occur if we picked the two 20-sided dice and two of the 12-sided dice, and got the highest value on each die: 20 + 20 + 12 + 12 = 64. We could get any integer from 4 to 64, inclusive. For this, we simply need inclusive counting. 64 – 4 + 1 = 61.

6) Consider the L in its current orientation, and start with it in the lower left corner. 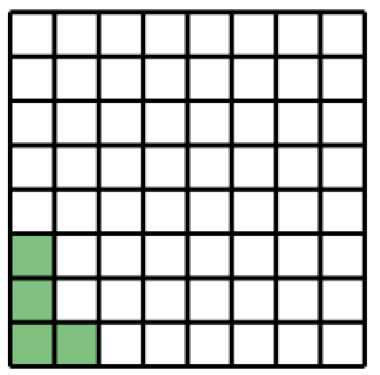 We can move this up so that the top square is in any of the five empty squares above it: those, plus this original, is 6 positions. Now, we can move any of these six to the right one space, then again, then again, until we have moved it to the sixth new space, when the right side of the L will come up flush against the rightmost boundary.   That’s seven total columns, each with 6 positions, for a total of 42 while it is in this orientation.

All of this is for the “forward L.” Now, if we pick up the card, and put it down flipped over, to get a “mirror image L,” this again will have 42 positions in each of 4 rotated orientations, for another 168 position.

7) Where we put one box has absolutely no bearing on where we put any of the other boxes. The placement of the four boxes is completely independent of one another.   For each box, we have four choices.

Blue Case I: all three in one cup = 3 possibilities

Blue Case III: one in each cup = 1 possibility

Red Case I: two in one cup = 3 possibilities

Red Case II: one in cup, one in another = 3 possibilities for which cup is empty

total = 6 possibilities for the red marbles

Now, the green marble can simply go in one of the three cups = 3 possibilities.

Blue Case I: all three in one cup = 3 possibilities

Blue Case III: one in each cup = 1 possibility

Red Case I: two in one cup = FORBIDDEN!

Red Case II: one in cup, one in another = 3 possibilities for which cup is empty

Now, the green marble can simply go in one of the three cups = 3 possibilities.

10) Part of the logic of the problem involves recognizing that every unique combination of prime numbers produces a unique product. There is no way that two different groupings cards will produce the same set of numbers.

First of all, the cards to go into the cup holding 4 cards.

Once we have placed 4 card in the first cup, we have three cards left, which means we have three choices of a single card to put into the third cup. Three choices. Once we place that, the remaining two cards must go into the second cup: no choice there.

11) We have to consider different groupings. First, all the cards together.

Case I: all five cards in one envelope (2 envelopes empty) = one possibility

Case II: four in one, one in another, one empty = five choices for the one by itself = 5 possibilities 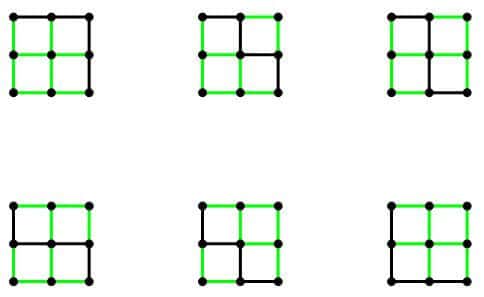 Now, we have to consider paths that take more than four segments to get from A to B. Consider the possibilities that begin: (down) then (right) then (up). The two possibilities are