Manhattan GRE (MGRE) is one of the best study sources for the GRE. The second edition of the 5 lb Book of GRE Practice Problems contains over 2,000 practice questions, including hundreds of new ones, while the questionable questions, as it were, have presumably been axed (more on this later).

Such a massive book, clearly calls for a massive review. I’ve broken up the review into Intro, Verbal (which is broken down by Verbal question types), and Math so you can hone in on the part that is most pertinent to you. 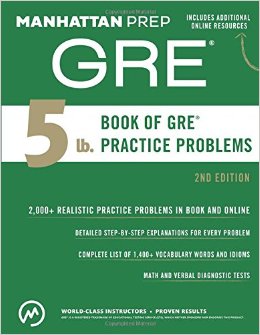 I think it is safe to say that no publisher will be able to create a test that, at least to experts, is indistinguishable from the actual test. At the same time, as a test taker, you should only use prep material that comes as close to the original as possible. The implicit assumption is that the more closely material hews to the real deal, the more effectively you can practice (and, by extension, the higher you can score).

So, is the new material more representative of what you’ll see on the test? I’ll break down my answer by section.

I can’t say the second edition is a marked improvement over the previous edition in mirroring the actual test, and this especially goes for verbal. I still don’t think that Manhattan GRE has figured out the formula for writing GRE-like verbal questions in the ETS vein.

There are a few things that Manhattan GRE doesn’t include in the creation of its Text Completions that could make you miss questions on test day that you might otherwise have answered correctly. Thankfully, much of the obscure vocabulary that marred the previous edition’s questions, especially those found in the MGRE Text Completion and Sentence Equivalence guide, are gone.

In terms of convoluted structure, there are sentences that parallel what you’ll see on the test. However, some questions are nothing more than really basic level sentences, e.g., (It was very <blank> outside, and so John was sweating), followed by ridiculously tough words (this is something Kaplan does).

Even questions that are written in sophisticated prose don’t mirror the algorithm (for lack of a better word) used on the real GRE. That is you won’t have to decipher what the blanks have to be based on the context; instead, the word that goes in the blank is the only possible word given the answer choices. So despite the plethora of questions, many of the questions in the TC section feel more like vocabulary exercises than actual GRE questions.

Usually, I group SE with TC. However, the SE questions in this book were noticeably inferior to their TC counterparts. Synonymous sentences oftentimes did not result (‘to bedazzle’ and ‘to flabbergast’ create two totally different meanings). The vocab could be ridiculously obscure. For example, one question was simply worded but one of the correct answers was “bootless”, a word so obscure that it would most likely never show up on today’s GRE. This is but one example in a sea of subpar questions.

In both the TC and SE questions, there is an exception to what I’ve stated above: the verbal practice sets at the very back of the book. The quality of questions here is higher and, except for the fact that the difficulty assigned to the questions is not consistent, the questions themselves more closely parallel what you’ll see on the actual test.

The passages (save for a couple of exceptions) just don’t merit the structure of those found on the actual test; the questions and answer choices following each passage are also without the subtlety contained actual test questions. Doing a smattering of verbal practice from this book might not hurt much, but relying solely on this book for verbal would be a big mistake.

These questions were drawn from Manhattan’s GMAT product, which is a good thing. Those questions have stood the test of time, in forums where such things are debated ad nauseam. That’s good news for test takers. Lots of questions to practice logical reasoning should definitely help test day. That said the questions have a slightly different “flavor” than the ETS questions, but overall the logical structure is similar.

The good news is the math section is so good that I don’t have to spend another 1,000 words pontificating on the nuances of each question type. MGRE has created hundreds of GRE-like problems that are conveniently broken up into different sections. Many concepts that most prep books overlook—standard deviation, weighted averages, and combinatorics—are given their own section replete with dozens of practice problems.

The second edition removed many of the so-so math questions from the previous edition. Still, there are some low-quality questions scattered in the mix, but really: with this plethora of practice material, you can’t help but hone your quantitative skills. I also like how the questions are roughly arranged in terms of difficulty so you can move your way up. On a side note: don’t work your way sequentially through each section, doing all, say 50 questions, for each section. Jump around a little, circling back to sections you learned previously.

I also like how the explanations are clearly presented. With many books, I feel like I often have to decode the explanation just to understand what should be a relatively simple problem. Those who wrote the MGRE explanations anticipated the difficulties students would typically have and clearly addressed them.

For solid quant practice this book offers a trove of practice. For verbal, material the results are far more mixed and you’ll definitely not want to make this book your go-to for verbal practice.

As I mentioned earlier, many questions from the last edition were removed, specifically in math. I didn’t have the time to go through all these questions (I had the 1st edition opened up on my desk too), but I think many of the average questions—questions that felt very straightforward and not like an actual GRE question—were removed. So while the 2nd edition comes in at about a hundred pages fewer than the 1st edition (and I’m guessing a few hundred grams shy of 5 lbs.), I don’t think much has been lost.

Curious about other GRE resources? Check out our experts’ review of the best GRE prep books!