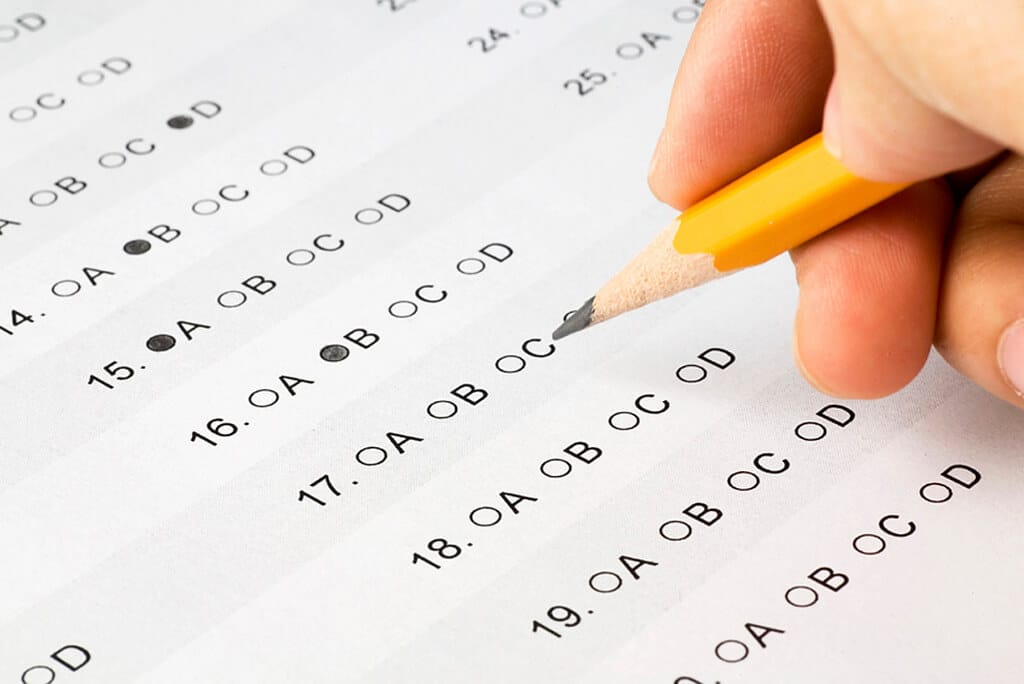 In Praxis Core Writing there are three basic categories of questions. One category has questions about text types, purposes, and production. The other categories focus on language skills and research skills.

Text/type/purpose/production questions are the biggest contributor to your score. Questions in this category are worth 60% of your final score.

Within this category, there are three tasks. You’ll read one passage and make revisions to it in context. Then you’ll write two essays, a source-based essay and an argumentative essay.

Questions 1-6 refer to the following passage

(1) The Southwestern U.S. enjoyed steady population growth and economic expansion through much of the twentieth century. (2) Their region continued to expand during the twenty-first century. (3) It is because cities such as Santa Fe, Las Vegas, and Phoenix are continuing to flourish and grow. (4) The Southwest largely owes its last several decades of growth to one of the United States government’s greatest engineering achievements: the Hoover Dam.

(5) The United States population expanded ever-Westward in the first three decades of the 1900s. (6) American business interests and government officials alike searched for ways to irrigate this very dry and dusty region of the nation. (7) In time, developers set their sights on the Colorado River. (8) This river flows through Colorado, Utah, Arizona, and Southern California. (9) The river is home to a few different common species of frogs and fish. (10) The Colorado seemed like an ideal source of irrigation, provided that the river’s powerful flow could be harnessed.

(11) Entrepreneurs and government agencies investigated possible sites for a dam on the Colorado River. (12) Finally, in 1927, the United States Congress proposed it at the Nevada-Arizona border. (13) The dam had to be big, because it held back what was then, and still is, the largest man-made lake in the United States.  (14) The amount of water in the lake, when full, could cover the whole state of Connecticut ten feet deep.  (15) Only a huge dam could stand up to the pressure of so much water.

In context, which of the following is the most effective way to revise and combine sentences 2 and 3 (reproduced below)?

Their region continued to expand during the twenty-first century. It is because cities such as Santa Fe, Las Vegas, and Phoenix are continuing to flourish and grow.

In context, which of the following is best to insert at the beginning of sentence 6 (reproduced below)?

American business interests and government officials alike searched for ways to irrigate this very dry and dusty region of the nation.

In context, what is best to do with sentence 9 (reproduced below)?

The river is home to a few different common species of frogs and fish.

In context, what is the best version of the underlined portion of sentence 11 (reproduced below)?

Entrepreneurs and government agencies investigated possible sites for a dam on the Colorado River.

In context, which is the best version of the underlined portion of sentence 12 (reproduced below)?

Finally, in 1927, the United States Congress proposed it at the Nevada-Arizona border.

Which sentence, if added immediately after sentence 16, would make the most suitable conclusion to the final paragraph?

With answers (D) and (E), “it” lacks a clear antecedent. In (D), “it” seems like a pronoun that could either refer to “the region” or “expansion.” And in (E), “it” could either be referencing “twenty-first century” or “expansion.” With very careful reading, one can guess that “because” is referring to the cause of the Southwest’s expansion in both (D) and (E). However, these answer choices have confusing, awkward construction

Answer (B) avoids pronoun confusion entirely because it doesn’t use pronouns. And really, pronouns are unnecessary. The adjective “regional” makes it clear that “expansion” is being described as it relates to the region of the Southwestern United States.

In answers (B) and (C), “in reality,” and “in contrast” suggest that a contradiction is being introduced. However, the idea that people would want to irrigate the Southwest doesn’t contradict the previously stated idea that more and more people were moving to the Southwest. So these phrases don’t fit the tone or purpose of the paragraph.

By saying “after that,” answer (D) incorrectly suggests that people began looking for a way to irrigate the Southwest after the time period mentioned in sentence 5, “the first three decades of the 1900s.” You can tell this is incorrect for two reasons. First, it’s highly unlikely that people would populate the dry, dusty Southwest increasingly for three whole decades before they even began to look for a good source of irrigation. Secondly, the next paragraph says that Congress decided on a site for a Southwest irrigation dam in 1927. This year falls within the first three decades of the century.

(E) is the best choice. The sentence should be deleted from the passage because it is off-topic. The passage is primarily about using a dam to irrigate the American Southwest. It isn’t about river biology or the types of animals found in the Colorado river.

Answers (C) and (E) do not match the meaning found in the rest of the passage. The passage gives no indication looking for a site for the dam was dangerous, as suggested in (C). And the idea that people looked for an ideal site for the Hoover Dam is treated as a confirmed fact, not a disputed fact or rumor.” So when (D) says that only “some reports” suggested people were looking for the best place to dam the Colorado River, this doesn’t really make sense.

(B) adds the best transition. By mentioning that the search for a dam building site began in 1902, (B) makes a connection to the time frame mentioned in the previous paragraph. This also fits well with the phrase “Finally, in 1927” in the next sentence.

If the sentence is left as-is, “it” lacks a clear antecedent. “It” could be referencing investigation, a site for a dam, a dam itself, or the Colorado River. So answer (A) can be eliminated.

(D) and (E) don’t fit the meaning of the passage. In (D), proposing a place to build a dam is not an alternate solution to some other previously suggested solution. A dam is the solution that had been proposed all along. And in (E), the reference to compromise doesn’t make sense. In the passage as a whole, there’s no suggestion that people disagreed on dam sites and needed to compromise.

Answers (A), (B) and (E) don’t fit in well with the overall theme of the passage. The passage isn’t about modern architecture (A) or about the superficial appearance of the dam (B). And the passage doesn’t look at dams in other regions than the Southwest at all (E).

(C) has some relevance to the passage, as the rate of population growth in the American Southwest is the reason that the Hoover Dam was necessary and remains important. However, only the first paragraph focuses this theme. So (C) would fit best somewhere in paragraph 1, not at the end of paragraph 3.

(D) works very well as a conclusion for the whole passage. It reminds people of the main subject of the passage — the Hoover Dam. And it reinforces the passage’s main idea: that the Hoover Dam is vital to providing water to people in the Southwest.

By the way, sign up for our 1 Week Free Trial to try out Magoosh Praxis Prep!