Calculus is primarily the study of rates of change. However, there are numerous applications of derivatives beyond just finding rates and velocities.

In this review article, we will highlight the most important applications of derivatives for the AP Calculus AB/BC exams.

Here is a list of some of the essential derivative applications.

Perhaps the most important application of the derivative is in finding rates of change. In fact, this is why Newton (and Leibniz independently) invented Calculus in the first place! Suppose y = f(x) is a function that models some real-world behavior. Here, the input is x and output is y. A natural question in the sciences is: How does the output change as one changes the input? In other words, what is the change in y resulting from a change in x?

For most purposes, it makes sense to consider the ratio of the changes. For example, if y changes twice as quickly as x, then that would be a rate of change of 2.

So this leads to the concept of average rate of change, Δy/Δx. (See AP Calculus Review: Average Rate of Change for more about this.)

Finally, by allowing the change in input to approach 0 (by taking a limit), we get the definition of derivative:

Of course after you learn the definition, then you get to learn all of the shortcut rules for derivatives that let you avoid taking limits at all!

Suppose the population of a small city can be modeled by P = 40532 e0.03t, where P is total population and t is time in years after the year 2000. How quickly was the population increasing in 2002?

The phrase “how quickly” means “at what rate”? So we use a derivative to find the rate of change.

Thus the city was growing at a rate of about 1291 people per year.

By definition, velocity is the rate of change of position. So, if you have a position function s(t), then the velocity function is nothing more than the derivative of s(t).

Analogously, acceleration is the rate of change of velocity – hence the second derivative of position. 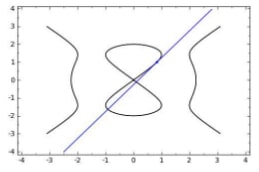 The “Devil’s Curve” with a tangent line attached.

Here is another reference for tangent lines and slopes of curves: How to Find the Slope of a Line Tangent to a Curve.

We also need the y-coordinate of the point. So plug x = 6 into the original function as well.

Finally, using point-slope form, we construct the equation of the tangent line.

There’s quite a lot that Calculus can tell us about the shape of a graph. We’ll focus on what the derivative and second derivative can say about a graph.

For a detailed review of these topics, you can also check out: AP Calculus Exam Review: Analysis of Graphs

The first derivative measures the slope of the curve. So just as slopes of lines can tell you whether the line increases, decreases, or is horizontal, the derivative can be used to locate intervals of increase and decrease, as well as any turnaround points.

At a critical point, the graph may turn around (but it’s not a guarantee). Then you can use the First Derivative Test to decide whether each critical point is a relative maximum, minimum, or neither.

First Derivative Test: Suppose x = a is a critical point for a function f. 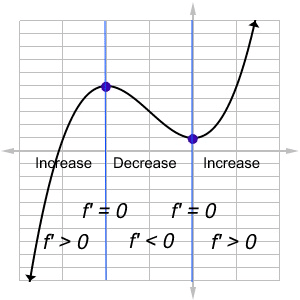 Second derivatives give you information about concavity (direction of curving), and inflection points (transitions between different concavities). From left to right: The graph is concave down when f ” < 0 and concave up when f ” > 0. The point of transition is the inflection point.

Sometimes the behaviors of two quantities are tied together. For example, raising the temperature of a gas in a fixed container will raise its pressure as well.

The method of Related Rates can be used to understand how rates of change are related based on an algebraic or geometric relation among the original variables.

Because the word “rate” appears in this topic, it should be no surprise that derivatives will be used!

A spherical balloon is filled with helium at a constant rate of 5 cm3 per second. How quickly is the radius increasing when the radius is 16 cm?

First we need to remember the volume formula for the sphere. This relates the two variables mentioned in the problem: volume (V) and radius (r). First, we take time derivatives of both sides of the volume formula to produce a related rate.

Optimization is simply the process of finding a maximum or minimum value. However, in most optimization problems, there is more than one input variable and certain constraints on the variables. So it takes quite a bit of algebra to set up the function before you can take its derivative.

Understanding optimization problems really takes seeing a fair number of them worked out. You can find a detailed review of optimization here: AP Calculus Review: Optimization.

Now that you’ve seen the various ways in which applications of derivatives can appear on the AP Calculus exams, you can be more confident on test day! Just keep in mind a few key concepts from which all of these applications arise.