An inflection point is a point in a graph at which the concavity changes. This graph shows a change in concavity, from concave down to concave up. The inflection point is where the transition occurs.

So let’s talk a little about concavity first.

Concavity is about curving.

We say that a function y = f(x) is concave up (CU) on a given interval if the graph of the function always lies above its tangent lines on that interval. In other words, if you draw a tangent line at any given point, then the graph seems to curve upwards, away from the line. This graph is concave up. At each point, the graph curves upward, away from its tangent line.

Conversely, a function is concave down (CD) on a given interval if the graph of the function always lies below its tangent lines on that interval. That is the graph seems to curve downwards, away from its tangent line at any given point. 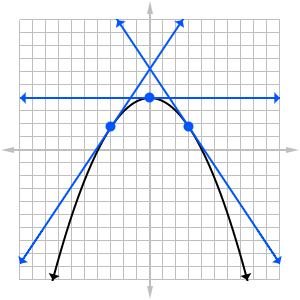 This graph is concave down. At each point, the graph curves downward, away from its tangent line.

This saying may help you to remember which one is which: Concave up looks like a cup; concave down looks like a frown.

Any point at which concavity changes (from CU to CD or from CD to CU) is call an inflection point for the function.

For example, a parabola f(x) = ax2 + bx + c has no inflection points, because its graph is always concave up or concave down.

Inflection points may be difficult to spot on the graph itself. So we must rely on calculus to find them.

Basically, it boils down to the second derivative.

Here’s a good rule of thumb. Look for possible inflection points by setting f '' = 0. That’s because the only way for f '' to change signs is to pass through the “neutral territory” of 0 (well, assuming the change is continuous, anyway).

Why the Second Derivative?

So what’s so special about the second derivative that makes it the go-to tool for concavity and inflection?

It all has to do with change — in this case, the changing slope of a graph as it curves upward or downward.

In order for the graph to be concave up, it must always increase slope as it progresses from left to right. Now remember, the first derivative measures slope. So f ' must be increasing whenever the graph is concave up. The final piece of the puzzle is the observation that increasing functions have positive derivatives. Therefore, the derivative of f ', that is, f '', must be positive!

Analogously, if the graph is concave down, then f ' must be a decreasing function. Hence, concave down means that f '' must be negative.

Let’s see by example how to locate the inflection points of a graph. Along the way, we’ll find out where the function is concave up and concave down.

. Find all points of inflection and intervals of concavity for f.

Our first task is to find the first and second derivatives.

Next, set the second derivative equal to zero and solve. Because f '' is a polynomial, we have to factor it to find its roots.

There are three solutions, x = 0, 4, and -3. These are not necessarily all going to be inflection points, though! We have to find out how the concavity changes from interval to interval first.

Let’s set up table to figure out what happens in each interval. Within each interval, choose a sample point to plug into f '' to determine the concavity.

That means that the only inflection points are at x = -3 and 4. Plug each of those points into the original function f(x) to find their corresponding y-coordinates. (A calculator can help out greatly here!) For more information about concavity, inflections, and other related topics, check out AP Calculus Review: Functions and their Graphs