Here’s a whirlwind tour of one of the most frequently tested sets of concepts on the GMAT Quantitative section: GMAT statistics. You don’t have to be an expert on statistics: a little goes a long way. Let’s learn some basic descriptive statistics formulas and go from there. 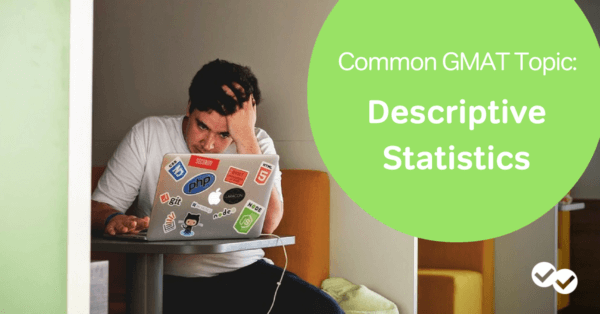 One very important GMAT Statistics idea is the mean.  The mean is just the ordinary average: add up all the items on the list, and divide by the number of items.  As a formula, that’s

Notice, we can rewrite that as: (sum of items) = average*(number of items).  Rewritten in sum form, it becomes one of the most powerful statistics formulas on the GMAT.  For more exotic kinds of averages you may see on descriptive statistics on the GMAT, see this post on Weighted Averages.

Both the mean and the median are “statistical measures of center”—that is, they are different ways of responding to the question “which number is most representative of the set?”  The median simply “chunks” the set, whereas the mean “feels” each number.  Changing  the value a single number, especially toward the high or low end of the set, never changes the median and always would change the mean.

a) Like the range, the standard deviation is always zero or positive, never negative.

b) If all the entries of the list are equal, the standard deviation = 0.  In other words, they don’t deviate at all, because they’re all the same. For GMAT statistics, you should know that this is the only way to get a minimum standard deviation of zero.

c) If you add/subtract a constant to/from every number on a list, that doesn’t change the standard deviation at all.  It’s just like taking the batch of data points and sliding them up or down the number line: that process doesn’t change how far apart they are from each other.

I’ll add an additional rule that really could only come into play in a very difficult upper-700s question of GMAT statistics:

If you master these simple ideas, you will dominate on Descriptive Statistics in the GMAT Quantitative section.  Here are some GMAT statistics practice questions:

Editor’s Note: This post was originally published in May, 2012 and has been updated for freshness, accuracy, and comprehensiveness.

To find out where statistics sit in the “big picture” of GMAT Quant, and what other Quant concepts you should study, check out our post entitled: