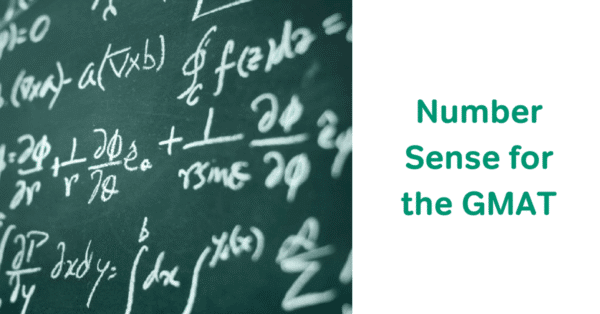 1) Rank those three in order from smallest to biggest.

3) Rank those three in order from smallest to biggest.

Solutions for these number sense problems will come at the end of this blog article.

What is Number Sense?

Many GMAT Quantitative Problems, like the foregoing pair, test number sense.  What is number sense?  Number sense is a good intuition for what happens to different kinds of numbers (positive, negative, fractions, etc.) when you perform various arithmetic operations on them.

Number sense is what allows some folks to “see” shortcuts such as estimation or visual solutions.  For example, in any of the problems above, there’s absolutely no need to do any detailed calculations: in fact, folks with number sense can probably do all the math they need to do in their heads.

Of course, it would be near impossible to make anything like a complete list.  The left-brain reductionist dreams of something like an exhaustive list one could study, but number sense is all about right-brain pattern matching.   If you’re not familiar with the distinction of left/right hemisphere, see this GMAT post which touches on similar issues.

How do you get number sense?

If you don’t have it, how do you get it?  That’s not an easy question.  There’s no magical shortcut to number sense, but here are some concrete suggestions.

1. Do only mental math.  You shouldn’t be using a calculator to practice for the GMAT anyway.  Try to do simpler math problems without even writing anything down.   Furthermore, look for opportunities every day, in every situation, to do some simple math or simple estimation (e.g. there are about 20 cartons of milk on the grocery store’s shelf—about how much would it cost to buy all twenty?)

3. This is a BIG one—in any GMAT practice problem that seemed (to you) to demand incredibly long calculations, but which had a very elegant solution of which you would have never dreamt—that problem & its solution are pure gold.  In a journal, write down what insights were used to simplify the problem dramatically.  Force yourself to articulate this, and return to this solution and to your notes on it often.  Over time, you should develop an array of problems like this, and if you study those solutions, you probably will start to see patterns.

4. Similar to #3: search the two forums,GMAT Club and Beat the GMAT, for similarly difficult questions, and look for elegant solutions.  That’s a great place to ask the experts (including yours truly) for more detailed explanations of their choices in the solution.

5. Here’s a variant on a game you can play, alone or with others who also want practice.  Pick four single digit numbers at random—some repeats are allowed.   You could roll a die four times, and use the results.  Now, once you have those four numbers, your job is to use all four of them, each of them only once, and any arithmetic, to generate each number from 1 to 20.  By “any arithmetic,” I mean any combination of: (a) add, subtract, multiply, divide; (b) exponents; and (c) parentheses & fractions

For any one number, you only need to come up with it in one way (although you can consider it a bonus to come up with multiple ways for a single number!)  Here, I show three ways just to demonstrate the possibilities.  A few examples for some of the higher numbers: 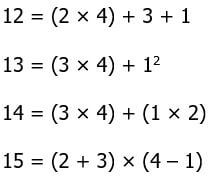 As you practice, you will start to develop a sense of how expressions for one number can be tweaked to give you another number.   Overall, using similar combinations, you have to get every number from 1-20 with these four, or with whatever four you pick.   Actually, the set {1, 2, 3, 4} is a very good warm-up set.  When you want more of a challenge, use {2,3,3,5}.   🙂

One of our Remote Test Prep Experts, Jeff Derrenberger, created an awesome web game based on this mental math game. Click on the banner to check it out!

Here’s a practice number sense problem. If you didn’t get anywhere with the practice problem, you may want to study the solution below carefully.

3) Here, we have to “un-simplify” the square-roots to get a sense of their relative size.

This demonstrates that III. is slightly larger than I.   Therefore, the order from least to greatest is II, I, III.

Editor’s Note: This post was originally published in December, 2012, and has been updated for freshness, accuracy, and comprehensiveness.