Why Fractions Are Hard

Of all the math topics that raise dread, fear, anxiety, and confusion, few do so as consistently and as potently as do fractions.  I have my own personal theory why fractions are hard.  The trouble is: think about when you learned fractions — maybe the third, fourth, and/or fifth grades.  That’s when fractions are usually taught, but there are two problems with that.  First of all, that’s before the tsunami of puberty hits you and virtually obliterated all previously held logical connections in your head.  More importantly, fractions, like many other topics in math, involve sophisticated patterns, but in the fourth grade, no one is capable of abstraction, so instead you are just taught to reproduce patterns mechanically, and relying on mechanical repetition has severe limitations: similarly looking things become conflated, and when you get confused, you basically don’t know what to do.  Many people simply give up at that point.

The solution is re-approach those mechanical procedures, but with understanding.  When you understand why you do each thing, then (a) you can remember it much better, and (b) in a moment of confusion you can figure out what to do.  I will lead you through fractions from the ground up.

What is a Fraction?

The fraction 2/7 also means the following.  Imagine dividing something whole into seven equal parts—one of those parts is 1/7 of the whole, so 2/7 = 2*(1/7) is two of those parts.  Probably this diagram will call up dim memories from your prepubescent mathematical experiences. First of all, let’s address the common mistake: when you add fractions, you can’t simply add across in the numerator and denominator (this is the mistake people make when they mechanically perform the rule for multiplication with addition instead!)

When the denominators are not the same — 3/8 + 1/6 — then you can’t add them as is, but you can take advantage of a sleek mathematical trick.  We know that any number over itself, say 3/3, equals 1, and you can always multiply by 1 and not change the value of something.  Therefore, I could multiply 3/8 by some a/a, and multiply 1/6 by some other b/b, and both would retain the same value.  I want to multiply each so that I find the Least Common Denominator  (LCD), which here is 24.  Thus

The same thing works for subtraction:

This is the easiest of all fractions rules.  To multiply fractions, multiply across in the numerators and denominators.

Notice, as always, cancel before you multiply.  Dividing a fraction by a number follows the same pattern:

Notice, this is really the same idea as: dividing by 3 means the same thin as multiplying by 1/3.  Also, again, notice we cancel before we multiply.

Another word for a fraction is a ratio: ratios and fractions are exactly the same thing.  A proportion is when you have two ratios, two fractions, set equal to each other.  For example,

One legitimate move is to cross-multiply, although doing so here would violate the ultra-strategic dictum: cancel before you multiply.  And it’s precisely this issue, what can you cancel and what can’t cancel in a proportion, that causes endless confusion.  Let’s look at the general proportion a/b = c/d.

First of all, as always, you can cancel any numerator with its own denominator — you can cancel common factors in a & b, or in c & d.  Furthermore, a proportion, by its very nature, is an equation, and you can always multiply or divide both sides of an equation by the same thing.  This means: you can cancel common factors in both numerators (a & c) or in both denominators (b & d).  The following diagrams summarize all the legitimate directions of cancellation in a proportion.

The following are highly tempting but complete illegal ways to cancel in proportions: 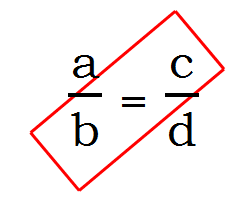 The trouble is, folks mechanically memorize the cancelling pattern for multiplying fractions — or even worse, they learn an utterly useless term like “cross-cancelling” — and then they mechanically apply that pattern when there’s an equal sign between the two fractions instead of a multiplication sign.  This is a major mistake, and any time a proportion appears on the GMAT, the test-maker is expecting a large flock of test-takers to fall into this trap.

Let’s solve the proportion we wrote above, with proper cancelling:

Notice, in that last step, to isolate x, all we had to do was multiply both sides by 3.  Cross-multiplying, while always legal in a proportion, often is a waste of time that simply adds extra steps.

To find out where fractions sit in the “big picture” of GMAT Quant, and what other Quant concepts you should study, check out our post entitled: