If you’re a New Yorker, you might have noticed by now that February ACT dates are always accompanied by a frustrating little asterisk and a footnote.

It turns out, the suspiciously absent February ACT isn’t just a result of a blood feud between New Yorkers and exams, or even an extreme aversion to getting out in the cold on an early Saturday morning. (Though that second one might be true anyway!) No, the real reason Empire State doesn’t have an ACT in February goes way back to a little law called “Truth in Testing,” passed in 1979. 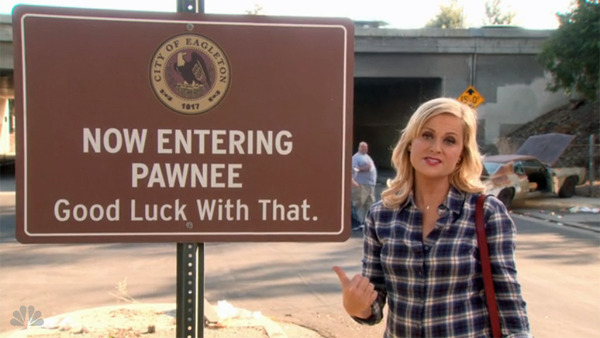 Unlike Pawnee and Eagleton, there’s no feud between NY and the ACT!

Back in the 70s, New York lawmakers decided that students should be able to see their actual test responses and answers, instead of just a number score. After a couple students discovered errors on the SAT (yikes!), lawmakers decided that students deserved more transparency from testmakers, and passed the Standardized Testing Act as part of the Admissions Testing Law in July 1979. The law is popularly called the “Truth in Testing” law. Now, ever since January 1980, when the law officially went into effect, New York students must be allowed to see copies of their actual tests and the correct answers.

So what do answer sheets and copies of tests have to do with exam dates?

Here’s where our story gets really weird! Not all ACT test dates are eligible for students to request copies of their tests, but the ACT must offer copies of exams for a certain number of exam dates. Currently, the ACT only offers answer releases for three Saturday exams (December, April, and June) and two non-Saturday exams, but it’s widely speculated that the ACT does not offer a February exam in New York to avoid releasing answers to another test. To make matters even weirder, this New York law gave an exception to the SAT, which is only required to offer answer releases to four tests instead of the five answer release dates that the ACT offers.

I’m not from New York…who cares about a state law?

Testing was pretty different before this 1979 New York law, and even though Truth in Testing is a state law, it has affected standardized college entrance testing nationwide. Since Truth in Testing required New York students be able to request access to their tests and answers, College Board began administering fewer tests in a school year. If every exam must be able to be released to students afterwards, testmakers would have to write a lot more questions!

Although the law allowed students to request copies of their own test for a fee, College Board took advantage of the legislature and began selling old versions of the test in book form in the 80s. (Check out the book cover from 1988 below!) Of course, the ACT also offers real tests in a study book for students.

Perhaps the biggest effect the Truth in Testing law had on national exams, even outside New York state borders, was that both the ACT and SAT now provide test questions and answers afterwards to students who request that information. The ACT calls this service Test Information Release (TIR), and the SAT offers Question and Answer Service (QAS). Whether you choose to take advantage of those services for a fee, you have that opportunity thanks to New York legislature! So while the rest of us are braving the February cold to take the ACT, New Yorkers bundled up at home on a Saturday morning. If you live in New York, you just need to be extra careful when planning your test dates!