In 2017, 1.7 million graduating students had taken the SAT. Of those, only 5% scored above 1400. How many scored a perfect 1600? Only around several hundred. When we spoke to the College Board, they confirmed: “A top score on the SAT is achieved by only a fraction of a percent of test takers.”

Not scared off yet? Good! Let those numbers inspire you. Because guess what? Someone has to score in the top 5%. And why can’t you be one of the perfect SAT scorers?

We’re not saying it’s easy. That perfect SAT score of 1600 definitely takes some serious legwork, as well as some serious strategy. But we’ve done our research, talked with some of our highest-scoring students, and found perfect scorers from around the country.

So if you thought it was impossible to get that perfect SAT score, think again! Here are some students who did just that…and are here to tell you how. What Does It Take to Get a Perfect SAT Score?

To get a perfect SAT score of 1600, you’ll need good prep materials, persistence, an understanding of the format, and more. Chances are, if you know somebody with a perfect SAT score, they didn’t just breeze through the test without ever having seen the official exam before. (If they say they did, take it with a big pinch of salt.)

How do we know this? We’ve talked with students who have gotten those scores…and every. Single. One. Prepared.

Not just some of them. Every single one.

But these students with perfect SAT scores didn’t just sit down and stare at that big blue College Board book for 50 hours. As we discussed their study habits with them, we noticed that a few big trends emerged.

Hari from Colorado got a perfect 1600 on the SAT—and a perfect 36 on the ACT. He took an in-person prep course, and going into the exam wasn’t even sure about his score. “I actually never got a perfect score during SAT practice,” Sowrirajan told the South Metro Villager. “At one point I was missing over 10 questions on the reading section.” And yet he chalks his impeccable scores to those very tests: “In the end, there’s no substitute for doing the actual practice tests.”

Andrew from Washington scored a perfect 1600 as well. After a 1550 the previous year, Andrew decided to go back and try to score even higher. He took in-person classes at a tutoring center. Andrew’s secrets? Positive thinking, learning about question types and test-taking skills, and not second-guessing himself unless he had a good reason to, as he told the Herald Net. As he told that publication, “At first it seems very daunting, but once you get into it you notice patterns for what type of questions come up and what kind of answers are usually not the right answers.”

Kyle from Wisconsin kept his explanation for his perfect score simple: “I just went in and did my best,” he told the Milwaukee Journal-Sentinel. Kyle had taken the PSAT previously, but still took some practice tests before the SAT.

Sunny from Nevada is another double-barreled top scorer: 1600 on the SAT and 36 on the ACT. Just like Hari, above, who studied intensely, Sunny told the Las Vegas Review-Journal that she studied for four to five hours a week, took more than 25 practice tests, and had a private tutor. She took the ACT twice to get that perfect score. The Review-Journal speculates that her perfect ACT score may have taken some of the pressure off of Sunny to get a perfect SAT score—which she then did. Her advice? “The most important thing is doing it because you want to do it. Not because anyone forces you to do it.”

Rushil from Abu Dhabi scored 1570 on the test, with a perfect 800 in Math and 770 in Reading/Writing. After taking the exam twice and scoring in the 1400s, Rushil then took six weeks to prep for his third exam—and he prepped thoroughly, using Magoosh’s resources in combination with official College Board materials, Khan Academy prep, and books including The Critical Reader and the Ultimate Guide to SAT Grammar by Erica Meltzer and the College Panda series by Nielson Phu. Overall, he estimates that put in between 60 and 75 hours of prep! On test day, he kept his breakfast simple, with yogurt, bread, and lots of water.

After his own experience, Rushil advises test-takers to keep their motivation up by thinking about the long-term: “Visualise yourself attending your dream college whenever you feel demoralised.”

Ben from California scored 1550: a perfect 800 in SAT Math and 750 in Reading/Writing. Ben prepped with Magoosh and Princeton Review, spending 20-25 hours over the course of a month practicing. He powered up for test day with extra protein: toast, a scrambled egg, turkey sausage, and assorted fruit (our mouths are watering!).

Ben has a lot of great advice for students: “Think of the test as a puzzle, which will make it more enjoyable to solve the questions.” He adds, “Having a totem [or] item that makes you comfortable with you is quite helpful, because it makes the test environment less stressful. It has to be legal for the test though. I have a signature good luck bucket hat that I wear on tests to make myself more comfortable.”

Srikhar from Louisiana is another 1550 scorer: a perfect 800 on SAT Math and 750 on Reading/Writing (he also got a perfect score on the ACT!). He found that the eight official College Board practice tests were helpful in his preparation—and he wasn’t stingy with his prep, either! Srikhar put in 200 hours over 9-10 weeks getting ready for the two exams. After he had his breakfast of a seasoned potato and eggs on test day, it definitely paid off!

Srikhar advises looking into scholarships for high test scores (and/or asking your family for rewards if you achieve your goal score). The recognition that comes with a perfect score was also a key motivator: “For me, this was one major driving factor during my practice period, pushing me through each day of repetitive practice. This adds more weight to the reward of achieving your goal score, keeping you even more motivated to continue working hard.”

Amisha from New Jersey scored 1540 after her second attempt, raising her score by a full 120 points within the span of a month. In preparation for her first test, Amisha spent about 100 hours over three months prepping using Erica Meltzer’s The Critical Reader, The SAT Black Book, and Magoosh’s SAT Prep. Upon receiving her first score—a 1420—during an October administration, Amisha was disheartened; while it is a great score, it was 80 points lower than her target. Influenced by the commonly-held belief that it’s hard to break 1500 if you don’t secure it at first go, she considered sticking with this score. But she decided to be relentless regarding her goal: after taking a break, she spent an additional 50 hours in November studying for a retake in December.

Amisha’s advice? “If you keep studying, keep yourself disciplined and on top of your SAT prep, and most importantly—have infinite faith in yourself and your abilities—you’ll certainly be able to get to the score you want. I say this with complete confidence…Don’t lie to yourself about how much effort you’re putting in, either. If you’re putting in minimal effort and telling yourself that it’ll be enough—chances are it very well won’t be.

“You know yourself and your work ethic the best. Find what works for you, stick to it, and remain positive throughout the process. I am confident you’ll be able to achieve the score you desire!” Jackie from Colorado ended up scoring a 1440 on the SAT: 780 Reading/Writing and 660 Math. How’d she get such a high score? She put in the time: 50 hours of preparation, including three practice tests to take the SAT twice. And she started early—some “light prep,” in her words, about six months before the test, gradually increasing until test day. So far, she’s been accepted to twelve colleges! In case you’re curious, she ate cereal before the exam and brought a banana for a snack.

Jackie’s advice? “Stick to your study schedule and remember the reason you’re putting so much effort in, especially on days when you have to sacrifice fun for test prep. It’s worth it to be prepared!”

Lizzie’s a committed test-taker: she took the SAT and the ACT three times each! But you can’t say it didn’t pay off. Her best SAT score was 1490: 770 Reading/Writing and 720 Math (her ACT scores were also awesome!). Lizzie only prepped for about 20 hours for each test in the month-two months before her exam. The key? She was selective in her materials: she used Magoosh and free practice tests she could find online. (If you do this, make sure they’re official!) She was accepted at six competitive schools and will be attending Notre Dame.

On test day, Lizzie stuck with her usual breakfast, which is pretty elegant, if we do say so—an English muffin and tea.

Lizzie’s words of motivation are pretty wise: “Whatever you put in beforehand is worth it. The worst feeling in the world is knowing that you could’ve done more. Make the most of the chances you have to do your very best, and buckle down and do it. Testing certainly isn’t everything, but it does deserve your best efforts. You can do it!!”

Ishaan from Michigan scored a perfect 800 on SAT Math and came close with his Reading/Writing at 730. Unlike a lot of students, Ishaan got this amazing score on his first try! He found Khan Academy’s free SAT prep helpful, spending about 60 hours in the six weeks before his test working with it. On test day, he powered up with some protein, eating oatmeal and a boiled egg.

Ishann’s words of motivation for future test-takers is to “analyze the test so much that it becomes easy.” 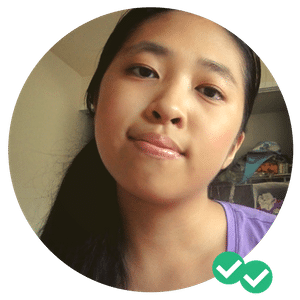 Karen from Puerto Rico is another test-taker with an astounding 800 on SAT Math, 680 Reading/Writing. She took the exam three times and, as is true for many students, saw her scores climb steadily each time!

That’s not to say she didn’t put in the work, though: Karen prepped for around 50 hours, using Khan Academy and putting in a good word for Magoosh’s detailed video explanations of problems. She took her final SAT after prepping with Magoosh and saw her score go up by 100 points, plus ended up getting into four very competitive colleges. We’re not saying there’s any causation here, but Karen also had the most unique breakfast of the students we spoke to: Costco frozen dumplings and a banana. So if you’re superstitious, better stock up now!

Karen advises students: “Be consistent. Do a little practice everyday, even if just 30 minutes. Learn why you got each of the problems wrong to not commit the same mistake again, don’t just skip it and move on. Take notes on why you got it wrong and what to do next time—quality over quantity.”

With Magoosh SAT, you can choose between a live cohorted class with an instructor (which includes all our lessons and practice questions) or access to the self-study option by itself.