But before we get to that, I will begin with two challenging GRE math problems. 1) Regular pentagon P has all five diagonals drawn.  What is the angle between two of these diagonals where they meet at a vertex of the pentagon?

2) How many diagonals does a regular 20-sided polygon have?

Explanations to these practice problems will appear at the end of this blog article. Jump ahead by clicking here.

First, some basic terminology to begin this discussion.  A polygon is any geometric shape all of whose sides are straight line-segments.   Any triangle is a polygon.  Any quadrilateral (including trapezoids, parallelograms, rhombuses, rectangles and squares) are polygons.  A pentagon is a 5-sided polygon.  A hexagon is a 6-sided polygon.  An octagon is an eight-sided polygon.  A circle or parabola or anything with a curved side is not a polygon.

A point where two of the sides of a polygon meet is called a vertex.  The number of vertices a polygon has is always equal to the number of sides it has.

Finally, there is this paradoxical word “regular.”  In everyday language, “regular” means “ordinary, unexceptional, commonplace.”  In geometry, it connotes the exact opposite!  A shape is regular if and only if it is both equilateral and equiangular—that is, if and only if all the sides have the same length and all the angles are equal.  The “regular” version of any polygon is the most elite, most symmetrical version possible of that polygon.  The “regular triangle” would be what we known as an equilateral triangle.  The “regular quadrilateral” is the square.   For higher polygons, you are most likely to see the regular version on the GRE, because the test (like all mathematicians) loves symmetry.

Diagonals of a Polygon

Now, we can talk about diagonals.   A diagonal is any line through the interior of a polygon that connects two non-adjacent vertices.  What does this mean?  Well, first of all, starting from any vertex, an adjacent vertex is either vertex connected to the starting vertex by one side of the polygon. Let’s start at vertex A.  Starting from vertex A, we are connected by sides of this quadrilateral to both B and D; vertices B & D are the ones that are adjacent to vertex A.  The only vertex not connected to A by a side of the quadrilateral is C.  C is A’s only non-adjacent vertex, and A is C’s.  Thus, one diagonal goes from A to C.  It’s not hard to see that the other goes from B to D.  Any quadrilateral has just two diagonals. Notice that triangles NEVER have diagonals: if we start from any vertex in a triangle, the other two vertices are adjacent.   There simply are no non-adjacent vertices in a triangle, so diagonals are not possible.  Among quadrilaterals, there are special rules for the diagonals of a parallelogram and the categories within parallelograms: The diagonals of a parallelogram bisect each other: that is to say, the intersection point of the two diagonals is the midpoint of each one.

A rhombus is a parallelogram with four equal sides.  The diagonals of a rhombus bisect each other and are perpendicular.

A rectangle is a parallelogram with four 90° angles.  The rectangle of a rhombus bisect each other and have equal length.   This is related to an old trick among carpenters.  When a carpenter cuts two pairs of equal lengths to make the sides of a door or window frame, he knows he has a parallelogram because of the equal lengths, but how does he know whether he has a rectangle?  Without precise equipment, it’s very hard to measure the difference between, say, an 89° or 90° angle.  Well, all the carpenter has to do is measure the two diagonals: if these two easy-to-measure lengths are equal, then it’s guaranteed that he has four right angles!

A square is a parallelogram, a rectangle, and a rhombus.  It is a regular quadrilateral with four equal sides and four 90° angles.  The diagonals of a square bisect each other, have equal length, and are perpendicular.

Diagonals of a Regular Pentagon

A pentagon is any five-sided polygon, and the sum of its angles is 540°, as we saw above.  The only pentagon you are likely to meet on the GRE is the most symmetrical, the regular pentagon.  Since the angles are equal, we can divide the sum of the angles by five.

That’s the angle of each of the five angles in the pentagon.

Here’s a regular pentagon with the five diagonals drawn. 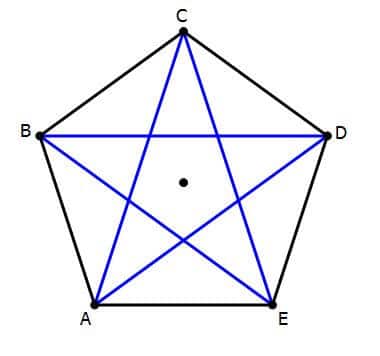 How many diagonals does a pentagon have? Any pentagon has exactly five diagonals.  These diagonals trace out the shape of a classic five-pointed star, such as that those on the Flag of the United States of America.  The lengths and divisions of this star are intimately related to that magical and mystical number, the Golden Ratio; Sacred Geometry is purported to give insight into the meaning of life, but you don’t need to know any of that for the GRE!

How would we find any angles in this shape?  Well, we know each big angle of the pentagon is 108°.  Look, for example, triangle ABC.  This triangle is an isosceles triangle, because AB = BC, and we know that angle ABC = 108°.  The other two angles must be equal: call them x.

This means that angle BAC = angle BCA = 36°, and so do many other symmetrically related angles around the shape.  We could subtract (angle BAC) from (angle BAE) to get (angle CAE)

From that, we could find many other angles inside the shape.   We could use analogous means to find angles involving the diagonals of any higher polygon.

Diagonals of a Regular Hexagon

A hexagon is any six-sided polygon, and the sum of its angles is 720°, as we saw above.  In a regular hexagon, From each vertex, there are three diagonals.  Since there are six vertices, you might think there would be a total of 3*6 = 18 diagonals, but that counting method double-counts everything.  You see, the diagonal from A to C would get counted once as a diagonal from A and again as a diagonal from C to A.  Thus, the number of diagonals in a hexagon is 18/2 = 9.   These can be groups into two kinds.  The six shorter diagonals together make a six-sided star, the Magen David.  The three longer diagonals form just three symmetrically criss-crossing segments, what is called in mathematics a “degenerate six-pointed star.”

These two diagrams show the nine diagonals of a regular hexagon.  Of course, the six-pointed star simply consists of two overlapping equilateral triangles, pointing in opposite directions.  (That geometric fact led to extensive mystical speculation in about the Star of David in the Kabbalah,  but again, you don’t need to understand any mysticism for the GRE!)

Diagonals of a Regular Heptagon

A heptagon is any seven-sided polygon (n = 7).  Sometimes it is called a “septagon,” but “heptagon” is the preferred mathematical name.  The sum of its angles would be

The angle measures are not integers!  This is why the GRE is exceptionally unlikely to ask you anything about the regular heptagon, and it’s also why you probably never talked much about regular heptagons in high school geometry.  It’s why most people aren’t even clear on the proper name for this beast!  Their non-integer angle measure makes them the first “black sheep” in the regular polygon family!  I won’t say anything else about them, because they almost never make an appearance on the GRE, but I will show you the two possible seven pointed stars from their diagonals: these stars are hauntingly beautiful, because of their idiosyncratic symmetry. Diagonals of a Regular Octagon

An octagon is any eight-sided polygon, and the sum of its angles is 1080°, as we saw above.  In a regular octagon,

That angle is the supplement of a 45° angle.  The regular octagon is the typical stop sign shape in many parts of the world. Similar logic as with the hexagon: five at each vertex, eight vertices, but that counts each diagonal twice, so the total number is 5*8/2 = 20.  AC and AG are what we might call “3 vertex diagonals”: there are eight of these, which form a star.  AF and AD, each parallel to two sides, are what we might call “4 vertex diagonals”: eight of these form another star.  Finally, AE is like a diameter of the whole octagon, cutting across its center: there are four such lines, and they form a degenerate eight-pointed star.

Just as the six-pointed star consisted of two overlapping equilateral triangles, the first eight-pointed star on the left consists of two separate overlapping squares: square ACEG and square BDFG.  (The names of these squares are reminiscent of the lines at W. 4th Street!)  Between these three stars (counting the degenerate thing on the right as a “star”) we have all 20 of the regular octagon’s diagonals.

Onward and upward!  The methods discussed in this blog can be extended to apply to a nonagon (n = 9), a decagon (n = 10), or any higher polygon.   Armed with this information, you should be able to answer anything the GRE asks you about a diagonal of a polygon!  If you had any “aha” moments while reading this blog, you might want to give the practice problems on the top another peek before reading the explanations below.

1) Let’s take a look at the pentagon with its five diagonals. An example of the angle between two diagonals at a vertex would be angle EBD, where diagonals BD and BE meet at vertex B.

Triangle BCD is isosceles with BC = CD, and angle BCD = 108°.  The other two angles are equal: call them each x.

So, angle CBD = 36°.  Well, triangle ABE is in every way equal to triangle BCD, so angle ABE must also equal 36°.  Thus, we can subtract from the big angle at vertex B.

2) If we start at one vertex of the 20-sided polygon, then there’s an adjacent vertex on each side.  Not counting these three vertices, there would be 17 non-adjacent vertices, so 17 possible diagonals could be drawn from any vertex.  Twenty vertices, 17 diagonals from each vertex, but this method double-counts the diagonals, as pointed out above.

Editor’s Note: This post was originally published in January, 2014, and has been updated for freshness, accuracy, and comprehensiveness.