Understanding prefixes on the TOEFL– beginning parts of words that have special meaning– can help you really master TOEFL vocabulary.  In this posta, we’ll do a careful study of some prefixes that are common on the exam.

Each prefix will come with a short Magoosh Comic that shows the prefix in context. After the comic, you can then see more examples of the prefix in use, as it might appear in different parts of the TOEFL.

Prefixes in TOEFL vocabulary: over-

On the TOEFL, the prefix over- usually means “too much,” as seen in the comic below. Over– can also sometimes mean “dominating or controlling,” or “at a physically higher place.” 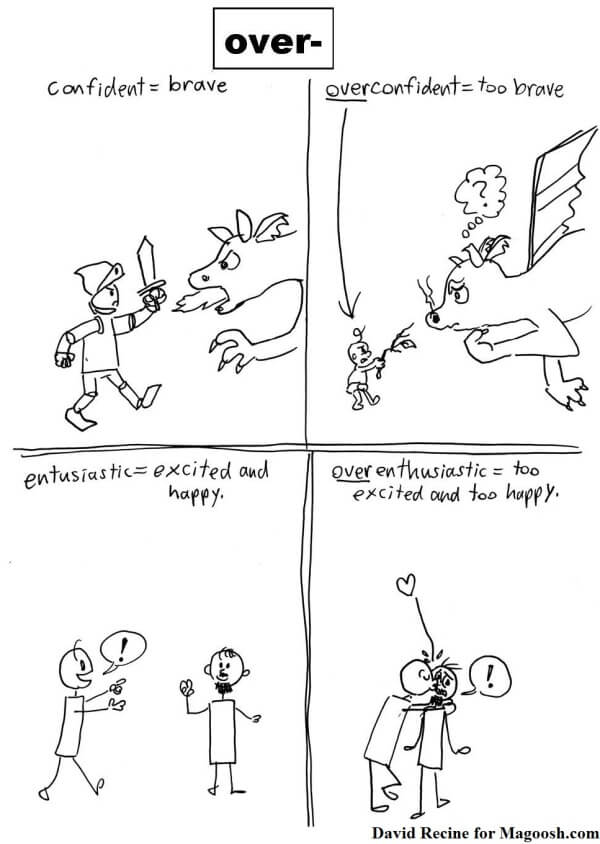 TOEFL examples of the over- prefix

Notice that over- can appear in a lot of different contexts. It can also be part of just about any grammar form. In this post, we see the over- prefix appearing in nouns, verbs, and adjectives; over- is possible in other grammatical contexts as well.

Knowing this prefix can help you understand TOEFL vocabulary across many different subjects, and in a wide range of grammatical uses. In fact, you were probably able to guess the meanings of any unfamiliar re- words you saw in this post, based on your knowledge of this prefix.

The meaning of re- in TOEFL vocabulary 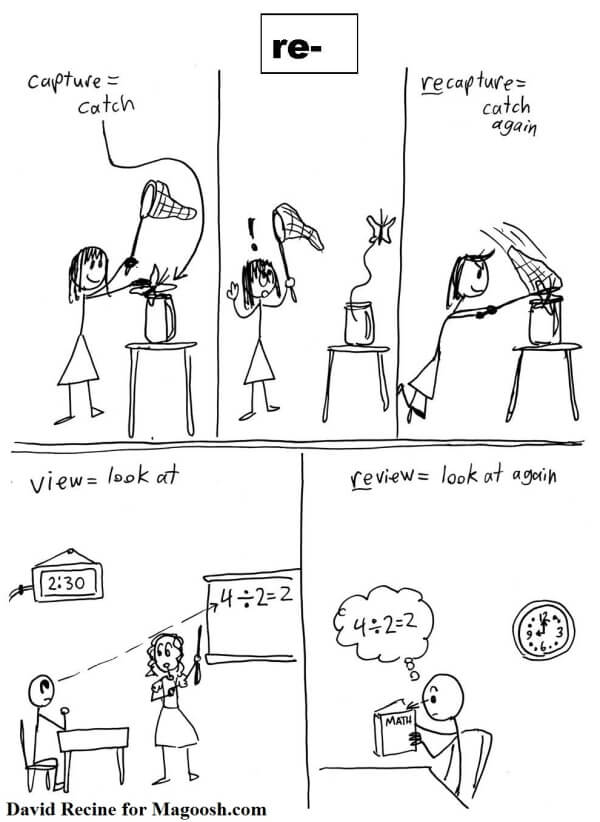 Examples of re– in TOEFL Vocabulary

Notice that re– can appear in grammatically different words. In this post, we see re- in a noun, verb, and past participle adjective. You can use your understanding of this prefix to improve your comprehension of both grammar and vocabulary on the TOEFL.

The meaning of bi- in TOEFL vocabulary

The meaning of bi- is pretty simple– it means two! Bi– is used in words that describe two of something, or describe something that has been divided into two parts. Bi- is in the same class as other numerical prefixes such as uni– (which means one), tri (or three), and quad– (4). To see bi– in relation to other prefixes of number, read the Magoosh Comic below. 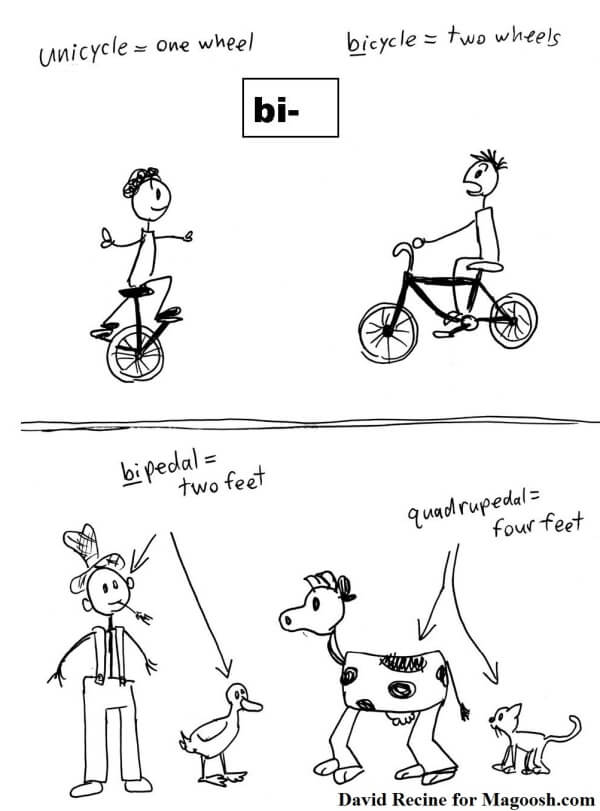 Examples of bi- in TOEFL vocabulary

If you aren’t familiar with every bi- word in this post, don’t feel bad. The real value of knowing the meaning of bi- is that you’ll be better at guessing the meanings of words that contain this prefix. Use a dictionary to check any guesses you made– if you really think about prefix, grammar, and context, there’s a good chance your guesses will be correct.

The meaning of co- in TOEFL vocabulary

Co- appears at the beginning of words related to doing things together. In the comic strip below, you’ll see this prefix used to describe helicopter pilots who fly together and instructors who cooperate (another co– word!) with each other to teach a shared group of students. 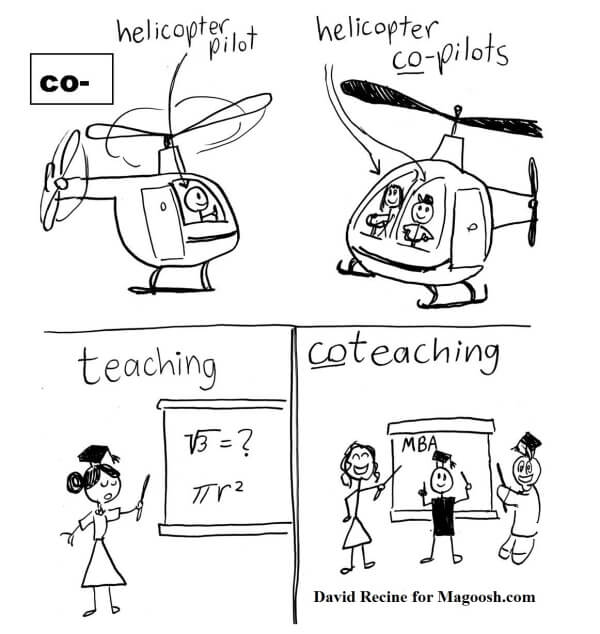 Examples of co- in TOEFL vocabulary

Notice that co- can appear in many different structures. Between the Magoosh Comic and the TOEFL-like examples, you can see this prefix as a noun and a verb. Co– also has the potential to be part of adjectives, adverbs, or other parts of speech. Also observe that co- sometimes is followed by a hyphen— a dash that separates it form its root word. Hyphenation is more common with this TOEFL prefix than with most others.

The meaning of mis- in TOEFL vocabulary

Mis- is used in words that describe an action that was done incorrectly, or a thing that is not being treated the way it should be treated. Of course, something that can be done the wrong way can be done the right way too. So words that start with the prefix mis- usually have an opposite root word that does NOT contain mis-. For instance, you can use something in the correct way, or do the opposite– misuse something in the wrong way.

In a few rare cases, a mis– word stands on its own, and you can’t make an opposite word just by removing mis-. Examples of this include the word mistake (the act of doing something in the wrong way), and misogynist (someone who does not treat women in the correct way). Take is not the opposite of mistake, and ogynist isn’t even a word! In the comic below, you’ll only see the mis- words that have a root word. I’ll give a greater variety of TOEFL-specific examples after the comic. Examples of mis- in TOEFL vocabulary

I made a point to include misconception and misnomer in the TOEFL examples above. These two words are pretty difficult compared to most other vocabulary with the mis- prefix. It’s unlikely that you’ll see those two specific mis- words on the TOEFL. But on test day, you are likely to see at least a few similar mis- words that don’t have direct opposites. So remember to focus  of the prefix itself– and not just the root word– as you study TOEFL vocabulary.

The meaning of out- in TOEFL vocabulary

Usually, out- words describe when a person or thing has done more than another person or thing. Less often, the prefix out- appears in words that describe a movement outward or an attempt to do something outside of one’s usual space. Words with this less common usage of out- may still appear on the TOEFL. Examples include outreach, which means the act of communicating with or helping others, and outcropping, a word for stones, trees, or other natural formations that stick out from the rest of their surroundings.

The Magoosh comic below shows out– in its common “more than” sense. The TOEFL examples that follow will deal with the prefix out- in all of its senses. Examples of out– in TOEFL vocabulary