In the workplace, there is always a need for decorum, or formal politeness. But so often, we face problems at work that make us want to be impolite… computer failures and broken equipment, theft of food from the break room refrigerator, missed deadlines, customers that fail to pay, and so on. The list of upsetting things could go on and on. Work is stressful—that’s why you get paid to do it.

If you’ve been working for at least a few years, you’ve probably learned the art of being diplomatic when you speak. In diplomatic speech, you discuss problems in a polite way that doesn’t cause people to get even more upset than they already are. One tricky thing about diplomatic is that it’s different in different languages. In a sense, you need to re-learn diplomacy when you learn a second language. Let’s look at the key features of diplomatic language in English.

Diplomatic language in the workplace uses words and phrases that are more formal. When practicing workplace diplomacy, avoid slang. Use language that’s closer to written English than normal speech. For example, suppose your office space is very dirty, even though the maintenance crew was supposed to clean it. You could say “This place is a mess,” but that’s pretty informal. “Place” has vague, context-dependent wording that suggests casual conversation.  Similarly, the phrase “is a mess” has a distinctly informal tone. To make your language more formal—and thus more diplomatic—it would be better to say something like “This work area needs some maintenance.”

Modal verbs are words that can be used before the main verb in a sentence. Modals give the verb a different connotation or give the whole sentence a different tone. (A list of the most common modals in English can be found here.) Modal verbs that express possibility can make English sound more polite and diplomatic.

For example, if you haven’t received your paycheck on time, you’ll obviously want to talk to a supervisor. But telling your boss “Check with payroll—they didn’t process my pay” could sound rude or demanding. However, if you say “You may want to check with payroll… they might not have processed my pay,” you sound much more diplomatic, just by adding the modals may and might. Similarly, if you get a paycheck that seems way too small, saying “This pay amount may be a mistake. Could you look into it?” sounds much more polite than saying “This pay amount is a mistake. Look into it.”

With more words, the diplomatic example sentences I showed you earlier can be made even more diplomatic. Let’s look at how more words can add diplomatic value: 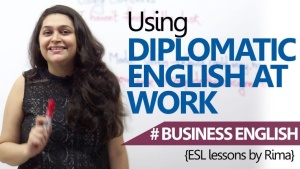 Of course, if you go overboard and get too wordy, the people listening to you might become impatient or annoyed. Add extra words carefully, especially if you are dealing with someone who’s very busy.