I can finally say I’ve finished my first round of college finals. And to be honest, I went into it thinking I was utterly and completely doomed. I figured, over the course of the two testing weeks, I would lose all sense of self. Pull so many all-nighters that I would pass for a zombie. Cry in the shower as I cracked under the pressure. Study in the fetal position until I gave up entirely.

It is with distinct pleasure that I can affirm none of these things actually happened.

And it occurred to me, on my taxi ride to LaGuardia Airport, that so much of my initial weariness for my college finals came, really, just from the hype of other people. It’s not like I had any bad prior experience that told me it was going to be sole-crushing. I sort of, well, assumed it naturally – which I’m beginning to realize is one of the easiest traps to fall into. With that thought in mind, I figured I might try to “debunk” some of the most commonly depicted stereotypes.

1. You have to lock yourself in the library

Believe it or not, there are – in fact – other places that are available for doing work. And you’ll quickly discover that the main libraries on your campus tend to be obscenely full during finals week anyways… to the point where it’s difficult to find a single seat. Also, often times, staying in the same place every time you study can prove pretty draining. For the sake of your sanity, I highly recommend mixing it up and frequenting cafes, empty classrooms, dorm rooms, parks, even dining halls.

2. There is no sleeping

Sleeping is not some right denied to you in the face of exam season. Yes, there are going to be those crazies who somehow decide the best way to optimize their skills is through never resting, psyching themselves out, and depending on copious amounts of coffee (and in scary cases, other things). But I want to stress as much as possible that operating at 200% is not necessary to be a successful student. In fact – it tends to be pretty detrimental (especially long term). College is one of the most important places to prioritize self care, so as long as you manage your time and stress decently well, you’ll be able to get enough hours of shut eye. 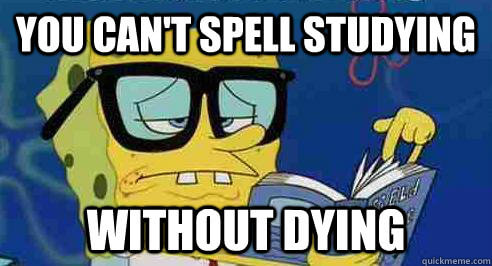 If right now you’re going, “What in the world is dead week?” – it’s basically a handful of free days after classes end where you have no responsibilities other then gearing up for your finals. And there’s a reputation that people use it to frantically cram/not eat/forget to shower. The thing is though, that if you’ve been putting in the work all semester along, dead week is actually kind of… nice. I mean, nice in the sense that you get to be in charge of your own schedule – controlling when you eat, work out, and so on. Plus, you’ll quickly realize that it isn’t totally possible to study for 12+ hours straight. Especially not when you’ve had a final earlier that day. It’s all about picking your moments of concentration.

Finals week is one of those things that is unifying in its isolation. It’s true that no one will be able to fully relate to your mental state. And most people will not have the exact same schedule of tests as you do. But at the end of the day, we’re all going to have that same little bit nervousness and apprehension. We’re all going to want to do well. Because of that, it’s pretty painless to find a study partner – or even just a venting buddy. A lot of professors, too, will be more available with their office hours and more responsive with their email. Think of it as one, college-wide bonding experience; and it’ll be over before you know it.