Home › AP › The Mayflower Compact: APUSH Topics to Study for Test Day
By Sarah Bradstreet on June 30, 2017 in AP 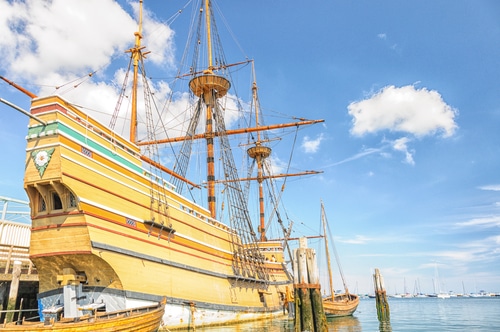 The Mayflower Compact was a document establishing the government of Plymouth Colony. To be successful on Mayflower Compact APUSH questions, make sure to study the significance of the compact as an early framework of American government, as well as the circumstances necessitating its drafting.

What is the Mayflower Compact?

The Mayflower Compact was signed by the Pilgrims aboard the Mayflower in 1620. The document established a government for the new Plymouth Colony. When the Pilgrims landed far north of their intended destination in Virginia Colony, they realized that they would be outside the jurisdiction of any established government. To maintain order, the settlers signed the Mayflower Compact as a means to pledge allegiance to King James, legitimize their settlement outside their chartered land, and to establish a civil government with the authority to enact laws.

Important years to note for the Mayflower Compact:

Why is the Mayflower Compact so important?

The Mayflower Compact is considered the first written document establishing self-governance in what would become the United States. Its framework was democratic in nature, with the signers electing a governor who executed laws based on majority rule. As such, it is widely considered to be the first step towards the nation building a democratic republic, as well as a precursor to the U.S. Constitution.

What are some historical people and events related to the Mayflower Compact?

What example question about the Mayflower Compact might come up on the APUSH exam?

“In the name of God, Amen. We, whose names are underwritten, the loyal subjects of our dread Sovereign Lord, King James, by the grace of God, of Great Britain, France and Ireland, king, defender of the faith, etc. having undertaken, for the glory of God, and advancement of the Christian faith, and honor of our king and country, a voyage to plant the first colony in the Northern parts of Virginia, do by these presents solemnly and mutually in the presence of God and one of another, covenant and combine ourselves together into a civil body politic, for our better ordering and preservation, and furtherance of the ends aforesaid; and by virtue hereof to enact, constitute, and frame such just and equal laws, ordinances, acts, constitutions and offices, from time to time, as shall be thought most meet and convenient for the general good of the Colony unto which we promise all due submission and obedience.”
-Mayflower Compact, 1620 (Source)

One purpose of the Mayflower Compact was too
A) establish a social contract among settlers of Plymouth Colony.
B) grant Separatists legal protection against persecution from King James.
C) expand the chartered land for Virginia Colony.
D) sanction Calvinism as the colony’s accepted religion.

The correct answer is (A). The Mayflower landed outside the jurisdiction of Virginia Colony. The Pilgrims, recognizing a need to establish an official government before settling ashore, drafted and signed the Mayflower Compact aboard the ship. Its primary purpose was to create a binding social contract among the Separatists and non-Separatists in order to ensure the order and success of the colony.