I like to think of them as mama and baby triangles; they look just alike, but one is bigger and one is smaller. It’s a little silly, but it’s a memory trick that’s helped a lot of my students.

When you encounter a “similar triangle” problem on the ACT Math section, you’ll know it because the question and/or diagram will clarify that the two triangles have the same angle measures.

The key is to find the ratio, or proportion between the side lengths. Typically this means setting up a proportion and cross-multiplying.

Let’s say you are given these two triangles with the same angle measures and these side lengths given and asked to find the missing side: 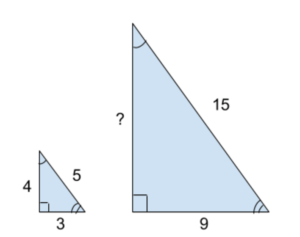 Now you might be able to eyeball this one because it is relatively straightforward, but you can always set up a proportion: 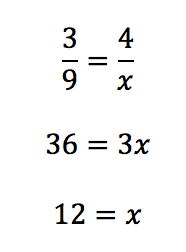 And there you have it. You’ve found your missing side and can move onto the next ACT problem coming your way!