If you are having trouble remembering this, simply remember that a rectangle has an area of \(A = bh\), and that a triangle is half a rectangle. 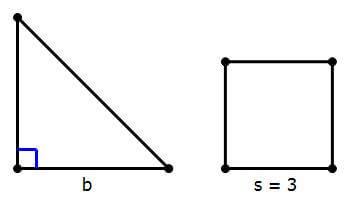 Statement (1) says that b is the length of the diagonal of the square. We know the side of the square is 3, so we could find the length of its diagonal with the ubiquitous Pythagorean Theorem. Therefore, we would know b. Statement (1) is sufficient by itself. Statement (2) says that the triangle and the square have equal area. Well, we know the area of the square is 9. The triangle has a base of b, and because we know it’s isosceles, we know its height is also b. It’s area, \(\frac{1}{2}b^2\), must equal 9. That means, we can solve for b. Statement (2) is also sufficient by itself. Answer: D

Mike served as a GMAT Expert at Magoosh, helping create hundreds of lesson videos and practice questions to help guide GMAT students to success. He was also featured as "member of the month" for over two years at GMAT Club. Mike holds an A.B. in Physics (graduating magna cum laude) and an M.T.S. in Religions of the World, both from Harvard. Beyond standardized testing, Mike has over 20 years of both private and public high school teaching experience specializing in math and physics. In his free time, Mike likes smashing foosballs into orbit, and despite having no obvious cranial deficiency, he insists on rooting for the NY Mets. Learn more about the GMAT through Mike's Youtube video explanations and resources like What is a Good GMAT Score? and the GMAT Diagnostic Test.
Previous
Next

8 Responses to GMAT Math: Area of a Triangle