Every now and then, the SAT uses a property of triangles that throws most for a loop. I like to call these triangles “Extreme Triangles”. So let’s imagine an isosceles right triangle. Remove the hypotenuse and you’ll get two line segments that meet at a right angle. Now, take the vertical segment and pull it down, the way you would a level.

What’s happening? Well, for one, the right angle is no longer a right angle, but is increasing the closer the line segment is to being horizontal. Secondly, there is going to come a point when the line is completely horizontal and the two segments know form one line. Right before this happens, when the line segment you’ve been pulling down is almost horizontal, stop and replace the hypotenuse that we unceremoniously plucked at the very beginning.

What do you notice about this triangle, besides the fact that the diagonal is now much longer? Well, it is one skinny triangle, an extremely skinny triangle. Not that you have to give me an exact number, but what would you say about the area? Pretty tiny, right? Well, that’s the concept. The area can be anything greater than zero, because as soon as the line becomes horizontal we no longer have a triangle—albeit a very skinny one—but a line.

Armed with this knowledge, let’s see if you can solve this week’s challenge problem!

Triangle ABC has a perimeter of 18. Which of the following cannot be the area of triangle ABC?

And here’s a picture of the board, in case you can’t see it well: 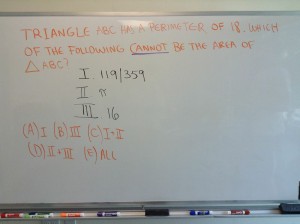