Bars and pies? Yum, pass the ice cream! Charts? Whoa, sounds like a fun new board game. Well, in both cases you are mistaken. The most common graphs featured on the SAT math are bar graphs and pie charts. Having a basic understanding of these two graphs can go a long way on the SAT Math Section. A good way to read these graphs is to first look at the y-axis (the vertical side) and the x-axis (horizontal side). Here you will find information that tells you what the bars about.

In this case, the y-axis represents the number of cars produced. The lowest number is 20,000 and each line represents an increment of 20,000. Sometimes, when the numbers are really big, you’ll have the numbers represented in increments of 20, but in the bottom left hand corner it might say something like “each number is in millions: 20 equals 20,000,000”.

Next, notice the x-axis. Here we have three different years. Each year is represented by a bar. To figure out how many cars were sold in that year, match the top of the graph to the numbers in the y-axis. For instance, in 2009 a total of 60,000 cars were produced. 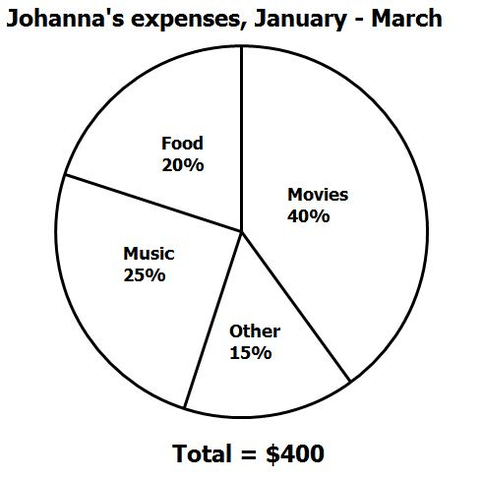 Usually when we cut up pies, we want to make sure each piece is more or less even. In math, pie charts aren’t always even since they are trying to describe the breakdown of different things.

If we look at the pie chart, we can see that the entire pie represents Johanna’s expenses for Jan. to Mar. You’ll notice that Johanna’s expenses aren’t the same. For instance, she really likes going to the movies but apparently isn’t too much into eating (guess she’s not a fan of pie!). To represent this we break up the pie into different percents that each stand for something. In this case we have music, food, movies, and other.

Usually, the SAT will give you something a little more complicated:

5. How much more money did Johanna spend on movies than on music?

Sometimes, a question might include a combination of a bar and a pie chart. While this might seem pretty scary at first, as long as you understand how each kind of graph works, then you should be fine integrating information from both of them.

There are also other kinds of graphs, such as scatterplots, but those rarely come up, and, when they do, it is only on the hardest-level questions.