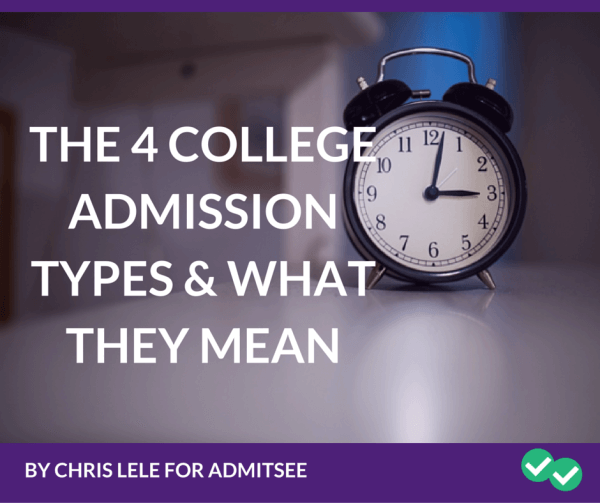 Applying to college is a brand new experience for most students out there. It’s a journey that starts long before you ever step foot in a college class and ends with a new beginning. But, as has been well documented, the process is difficult. Many high school students don’t have a good grasp on the terminology, and most don’t really have much direction. The questions raised can certainly be overwhelming – Where to apply? When to start? Who to ask for help? What to write about? Fortunately, there is a seemingly endless list of resources at your disposal.

One of the most confusing aspects of the college admissions process is the timeline. There are different types of applications to consider, and understanding these can potentially influence the likelihood of getting in. It’s no secret that colleges and universities across the country are starting to see a surge in applications, as the number of students applying, along with the general quality of resumes, is increasing. But there are different options to consider: early decision, early admission, rolling, regular decision, deferred admission, and more.

So how do you decide? AdmitSee, a peer-to-peer college admissions platform that helps students get into college, is here to help break it down.

This is probably the most straightforward of the entire bunch – if you get in, you go. It’s also commonly referred to as binding, due to (in most cases) the absolute nature of acceptance. Typically, early decision applications are due at the end of October/early November, and you’ll receive acceptance by mid-December. There are a few positives for early decision, namely, you know your outcome early. If you’re accepted to your early decision school, your college application process is finished once you get your letter. However, this means you need to be 100% confident in your decision to apply. Though early decision gets fewer applications than regular decision (and, thus, increases your chances of acceptance), many students would rather apply regular decision, simply to have more options.

Much like early decision, early admission applications are due at the end of October/early November, and you’ll likely hear back by January 1. However, the biggest difference between the two is the binding nature of getting in. You aren’t required to attend if you’re accepted early admission, so some students apply to multiple schools early. While you still get your responses back quicker, you can still pursue more than just one school. Not all schools offer early admission though, so it’s important to note when researching colleges and universities.

This is the standard college application timeline. Regular decision gives you more time to research and apply, since all materials are due later in the year, anytime from January 1 to February 15 of your senior year. It’s imperative that, when doing research on schools, you make sure the important deadlines – every school differs on when applications are due, so be sure to stay alert.

This one is a bit trickier than the others. Rolling admission is a large window in which students can apply any time, but it works on a first-come-first-serve basis. The earlier you apply to a school with rolling admissions, the better, since spots fill up as they accept students. But there are definite pros and cons to this approach. On one hand, it’s widely believed that you can increase your chances of acceptance by applying earlier, since they look at your application sooner (and you receive a response sooner, as well). But the longer you wait to apply, the fewer spots available, thus reducing your chances.

In some cases, deferring your acceptance to school is the best choice of all. Some students just aren’t ready for the transition to college, nor do they have to be. Deferring your admission to the following year can give you time to work, travel, and experience other things. Often known as a type of Gap Year, deferred admission pushes your acceptance back a year to give you time off. Not all schools are willing to defer your admission, so make sure to contact each school to find out.

So what’s the best approach? Well, that varies from student to student. Some know exactly where they want to go, so early decision is the smart choice. If you’re still unsure, regular admission seems smartest – it gives you time to figure it out.

Ultimately, it’s about finding what school is right for you, and that can be the biggest challenge in itself. While some students know their dream school from the start, others find the perfect fit as the process moves forward. There’s no right or wrong answer – but understanding the process is the first step towards getting in.