Tensions continued to increase between the U.S. and France until the Quasi War broke out from 1798 to 1800. The XYZ Affair was one of the events that led to this war. What was it? Who was involved with it? Here are some XYZ Affair APUSH review points to know for the exam.

What Was the XYZ Affair?

France seized American ships as they fought against the British. However, tensions between these nations continued to rise, especially when President John Adams criticized the French Revolution.

The agents said that the Americans needed to pay a substantial bribe among other things to even meet with the French Foreign Minister. This angered President Adams. He reported the event to the U.S. Senate, referring to the French agents as X, Y, and Z. Thus, the event became known as the XYZ Affair. 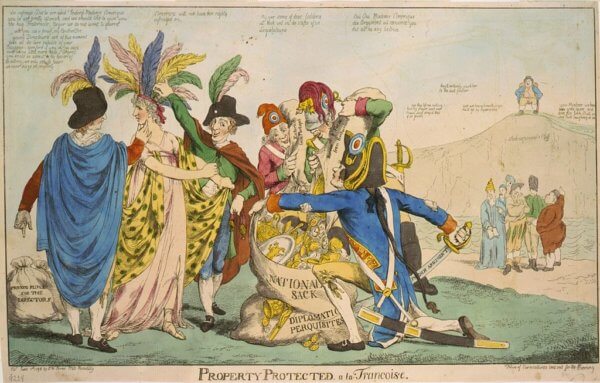 Importance of the XYZ Affair

What transpired from the XYZ Affair?
a. The Americans refused to meet with the French delegates.
b. Americans were able to purchase the Louisiana Territory for only $15 million.
c. The Americans and French fought an undeclared naval war.
d. Americans provided support to the British during the Napoleonic Wars.

Answer: C. Because of the XYZ Affair, the Americans increased their navy and warships. Then, they fought a naval war against the French. This lasted until Napoleon took control of the country.

The XYZ Affair:
a. occurred because the French refused to stop firing on American naval ships even though they were at work with the British and not America.
b. involved three French agents who refused to let American delegates speak to the French Foreign Minister until they paid a bribe.
c. strengthened the relationship between America and France during a time when both countries were at war with Britain.
d. included three American delegates and three French agents who worked diligently together to improve the bad relationship between both countries.

Answer: B. The XYZ Affair is the name given to the events that conspired when three American delegates went to speak to the French Foreign Minister. Instead, they met with three French agents (referred to as X, Y, and Z). The agents said that the Americans needed to pay money in order to meet with Marquis de Talleyrand. When President Adams announced the event to Congress, it became known as the XYZ Affair.

Jamie graduated from Brigham Young University- Idaho with a degree in English Education. She spent several years teaching and tutoring students at the elementary, high school, and college level. She currently works as a contract writer and curriculum developer for online education courses. In her free time, she enjoys running and spending time with her boys!

« AP Calculus BC Review: Series Convergence College Essay Myth #3: Colleges Can’t Tell If Someone Helps Too Much on the Essay! »