Home › AP › Sacco and Vanzetti: APUSH Historical Figures You Should Know
By Allena Berry on October 31, 2017 in AP

The case surrounding Sacco and Vanzetti has become the stuff of true crime legend, and the event may well deserve the attention it has gotten. In one trial, we see the convergence of anti-immigrant, anti-communist, and anti-poor sentiments that eventually led to the deaths of two men. While it is not clear whether or not Sacco and Vanzetti actually committed the crime for which they were eventually put to death, it is clear that these figures represent larger trends that you may encounter on the APUSH exam.

Who were Sacco and Vanzetti? And what was their case all about?

Nicola Sacco and Bartolomeo Vanzetti were Italian immigrants living in Massachusetts at the turn of the 20th century. They led relatively simple, blue-collar lives. Sacco was a shoemaker and Vanzetti was a fisherman. Neither had a criminal record. Their biggest crime would be that they were communists and labor organizers at a time where one’s politics could get them killed in the United States.

On April 15, 1920, two workers were killed in a robbery gone wrong. Shortly after the incident, Sacco and Vanzetti were accused of the crime. Their lawyer (and prominent socialist) for the trial, Fred H. Moore, had the strategy to play up their radical views in the courtroom. That way, the case would be seen as turning on political alliances and not evidence. Moore’s strategy worked, and the trial of Sacco and Vanzetti became national – and international – news. 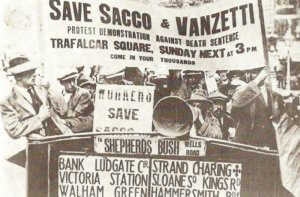 Protest to save Sacco and Vanzetti in London, England in 1921. (Source)

Throughout the trial, Sacco and Vanzetti claimed their innocence and framed their trial in radical terms.

“I know the sentence will be between two classes, the oppressed class and the rich class,” Sacco claimed in court. “And there will be always collision between one and the other. We fraternize the people with the books, with the literature. You persecute the people, tyrannize them and kill them. We try the education of people always. You try to put a path between us and some other nationality that hates each other. That is why I am here today on this bench, for having been of the oppressed class. Well, you are the oppressor.”

Sacco and Vanzetti’s claims of unfair, oppressive treatment were further substantiated when one of the actual perpetrators of the crime confessed in 1925 and named his co-conspirators; Sacco and Vanzetti were not among those named. Regardless, the authorities refused to investigate the claims. Although Moore’s strategy of highlighting Sacco and Vanzetti’s radicalism worked to make the case a national news item, it may have led to the judge and jury feeling less sympathetic for the two, ultimately leading to their conviction.

Even though many prominent figures got involved in the case, pleading for the lives of Sacco and Vanzetti, the two were executed on August 23, 1927. On that day, 250,000 individuals engaged in a silent protest in Boston.

For more on the Sacco and Vanzetti trial, watch the following clip (part 1 of a multi-part documentary).

What were some of the implications of the Sacco and Vanzetti trial?

I’ll answer this question by putting the Sacco and Vanzetti trial in a broader, historical context. This trial occurred in the mid-1920s, the time of the Jazz Age and the Progressive Era, two seemingly contradictory trends in US history. On the one hand, you have excess, drinking, and brazen music; on the other, you have progressives who favor things like Prohibition (which was not struck down until 1933).

I would place the implications of the Sacco and Vanzetti trial in a similar sort of paradox. The idea of America brought many immigrants, like Sacco and Vanzetti, to the major cities, but the idea – the promise – wasn’t all it was cracked up to be. This had deadly consequences for immigrants like Sacco and Vanzetti, but also any non-white American. (There is an interesting, ongoing debate among historians and social scientists alike regarding whether or not Italian and Irish immigrants were ever considered not white. The historian Nell Painter explains what this means, and how the definition of white has changed over time, in the Big Think video below.)

What is an example Sacco and Vanzetti APUSH question?

Although you may not get a direct question about Sacco and Vanzetti, you are likely to get a question about the Gilded Age and the Progressive Era. Using these two figures as a case study should help you make sense of this contradictory time period.

“There are always stereotypes of groups. I don’t think there’s ever been a time when one group didn’t stereotype another. But in 1915 there was a considerable concern around the country that this new flow of immigrants, coming in from different parts of Europe and some not from Europe at all, would not assimilate quickly and possibly not assimilate at all. Their stereotypes had to do mostly with the concerns about the sharply different cultures that they brought with them.”
Excerpt from Otis Graham, 2006, speaking with TIME Magazine

Which of the following is the best example of a consequence of the kind of stereotyping that Graham speaks about in the above quote?
A. The passage of the Chinese Exclusion Act of 1882.
B. The New York Draft Riots of 1863.
C. The execution of Sacco and Vanzetti in 1927.
D. The Jim Crow laws from the 1880s through the 1960s.