Although the success of the ideology is questioned by historians, the idea of “The New South” was a way that southerners made sense of their defeat and their new place within the United States after the Civil War. But just how new was the New South? And what were the goals of this ideology? Keep reading to find out more about this important topic on the APUSH exam.

What was the New South ideology?

Henry Grady, an Atlanta journalist, is credited with coining the term “The New South” in his editorials. Instead of building a society that had at its foundation slavery and agriculture,

“The new South presents a perfect democracy…a social system compact and closely knitted, less splendid on the surface, but stronger at the core; a hundred farms for every plantation, fifty homes for every palace; and a diversified industry that meets the complex needs of this complex age” (Grady, “The New South”).

From this quote, it’s clear that Grady was responding to an idea that was popular at the time: the Confederacy lost the Civil War because it was too agrarian, too economically polarized (among whites), too old. The New South would rectify these problems, Grady believed (even though many historians debate the extent to which these were the actual problems of the Confederacy; I’ll speak more on that later).

It may be most helpful to contrast the New South to the “Old South.” As will become apparent as you continue reading this post, the distinctions between New and Old may have been more of a marketing ploy or a rallying cry than substantive shifts in the political or economic realms of the former Confederacy.

The New South ideology was an important force behind ending Presidential Reconstruction (Radical Reconstruction had already ended by this point) and bringing about the Compromise of 1877, which gave the presidency to Republican Rutherford B. Hayes in exchange for removal of United States troops from the South. This effectively ended any legal protections African Americans had received after being emancipated.

Was the New South ideology only about white men? Where were the women and the people of color?

According to Grady, the New South would promote the same racial hierarchies that existed before the Civil War. As he stated in 1888, “the supremacy of the white race of the South must be maintained forever, and the domination of the negro race resisted at all points and at all hazards, because the white race is the superior race… [This declaration] shall run forever with the blood that feeds Anglo-Saxon hearts” (Myrdal, p. 1354).

Grady and other New South advocates were generally against Reconstruction, protesting what they viewed as Northern encroachment and exploitation by carpetbaggers. This ideology was supported by The Dunning School of historians, who portrayed southerners who opposed Reconstruction by violent means, such as the Ku Klux Klan, as “Redeemers.” In popular culture, this ideology was put on a national scale thanks to D.W. Griffith’s film “The Birth of a Nation,” a racist portrayal of Reconstruction. 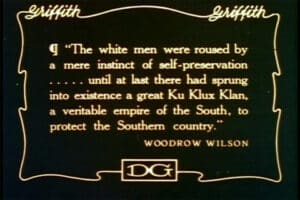 President Woodrow Wilson, praising the release of the Birth of Nation. Source here.

Was The New South ideology successful?

It depends on what part of the ideology you’re talking about.

Economically, the idea of the New South didn’t come to fruition. The region remained largely rural, agrarian, and poor: by 1900, per capita income in the South was 40% less than the national income. This was largely because the system of sharecropping left much of the plantation-order in tact. And although the South did develop some textile mills, the majority of the wealth was concentrated in the hands of capitalists, not spread out among white workers to create a middle class. Socially, racial violence flourished. Lynchings and other forms of racial violence were routinized into the fabric of southern life, as was Jim Crow segregation. It’s important for you to remember that as much as the New South was about economic and political modernization, those espousing this ideology had no intention of erasing the racial hierarchy that had been set by slavery. Anti-lynching banner flew outside NAACP headquarters in midtown Manhattan from the early 1900s until 1938. Source here.

Furthermore, the New South ideology was remedying issues that may not have been the Confederacy’s true weakness. As historians have made clear, the Southern economy prior to the Civil War was the foundation of capitalism as it existed in the rest of the country and the world. Rather than being set in traditional, agrarian ways, under this interpretation, Southern plantation owners were capitalists in much the same way as Northern industrialists (see The Half has Never Been Told by Edward Baptist and The Vast Southern Empire by Matthew Karp).

What kinds of questions will I be asked on the APUSH exam about the New South?

Use the political cartoon below to answer the following multiple choice questions. 1. The political cartoon above best supports an ideology that
A. Promotes women working outside of the home.
B. Believes in industrializing the South.
C. Urges a return to the economic policies of 1861.
D. Teaches young women how to work machinery.

2. The man in the upper left of the political cartoon most likely represents
A. Wealthy plantation owners in the Old South.
B. British royalty at the time.
C. Cotton, the chief cash commodity in 1861.
D. Northern aristocrats coming into the South to make a profit.