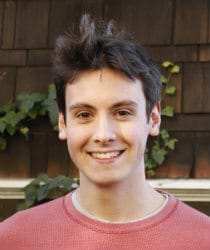 Today’s Magoosher is Mark Thomas, our miracle-performing designer who single-handedly creates all those handy infographics you use before you test!

Mark graduated from UMass Amherst with a BFA in Studio Art. And when he’s not working at Magoosh, he can be found frequenting galleries and museums. He also likes hiking, climbing, traveling, and searching for places in San Francisco that will show Celtics games.

And now, an exclusive Q&A:

Q: So Mark, how was your weekend?

A: Awesome! And totally boring! I spent the previous weekend (Fourth of July) on a road trip to Crater Lake National Park, Smith Rock and Portland OR to visit some friends. The trip was incredible, but ended with way too many receipts from various gas stations and In-N-Out Burger. So this weekend’s theme was more about relaxation and Netflix.

Q: Road trips are awesome. You know what else is awesome? Words. Especially when you work in test prep. Do you have a favorite one?

A: Since misanthrope has already been claimed (see Zach Millman’s bio), I’ll have to go with “discombobulated”. It’s a fun word to say!

Q: Weird … “discombobulated” just so happens to be my favorite word, too. Did we just become best friends? Wanna do karate in the garage? Maybe later. First, if you had to be trapped in a book for 24 hrs, what book would you pick and why?

A: That’s a pretty tough question, but I’d have to say Hitchhiker’s Guide to the Galaxy. I have to figure out the 42 puzzle.

Q: Nice choice. And good luck figuring out the puzzle in 24 hours. Now, for a really important, life-or-death kind of question: What store would you hide out in if zombies attacked?

A: Costco? Or maybe a Brookstone if there was still power.

Q: Yeah, I bet the zombies will keep the power on. But what if you got to choose to live in a place where zombies didn’t even exist? A.K.A. Middle Earth or in a Galaxy Far, Far Away. Pick one.

A: The people. My colleagues are some of the most positive, driven and forward-thinking people that I’ve been fortunate enough to meet. Everybody here is genuinely passionate about improving the test-prep experience while helping students get into their target schools. And they love to send out free t-shirts and pens, which I consider a huge plus.