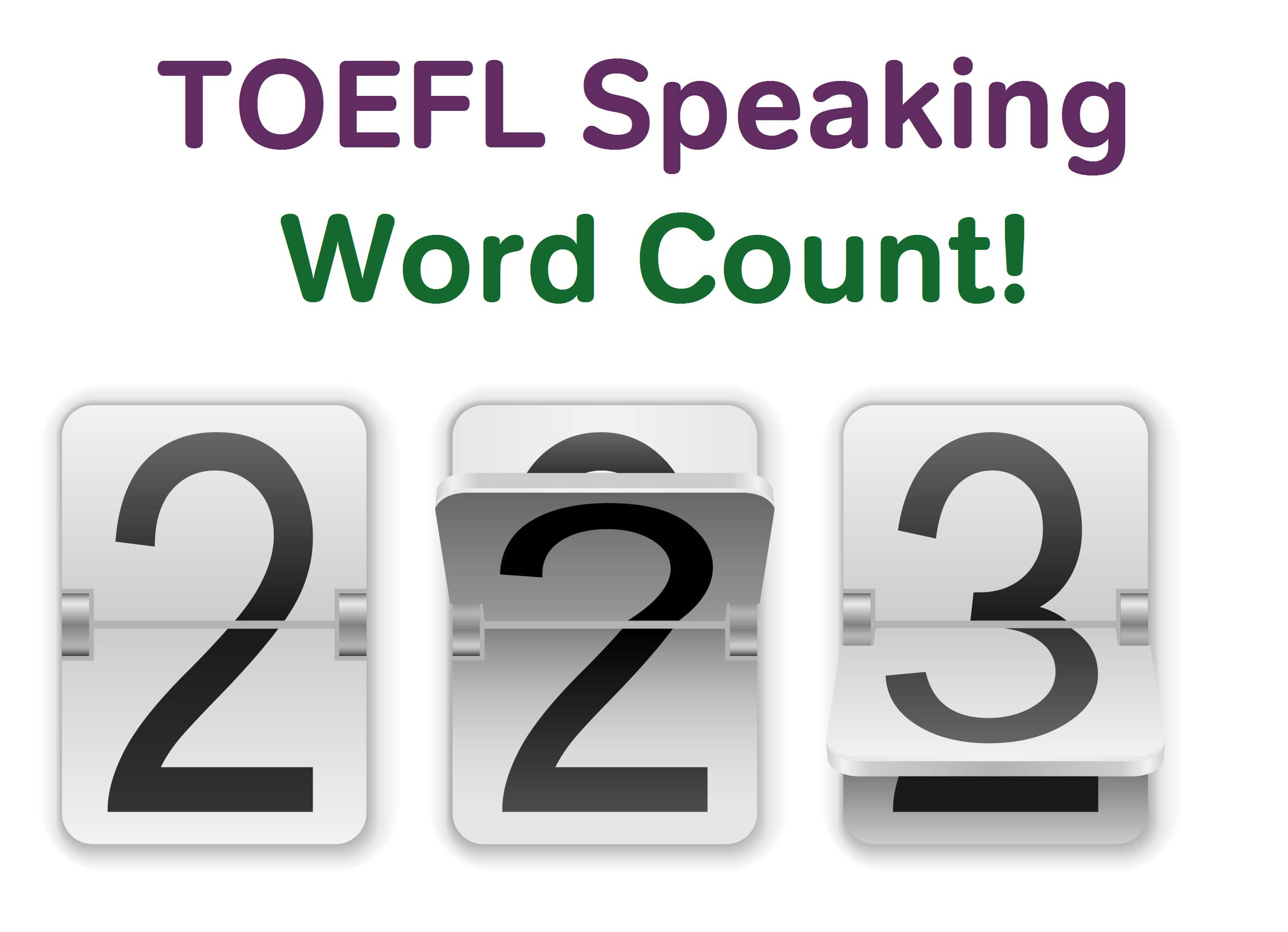 Word count is usually thought of as a “writing” thing, not a speaking thing. But the amount of words that you use really matters in TOEFL Speaking strategy. Today, we’ll look at word-count in TOEFL Integrated Speaking tasks.

This strategy is especially good for students who have a strong non-native accent when they speak English. It’s also good for students who are a little weak when it comes to English intonation. If your English pronunciation and rhythm are “off,” you can still be perfectly understandable, you just need to speak more plainly and more slowly.

To use this strategy, you don’t need to slow down your speech so much that it become unnatural. But you do need to speak slower than the average native speaker would. For many TOEFL Speaking students I’ve worked with, the correct slower pace allows them to say about 100 words in the 60 seconds time limit. This doesn’t need to be an exact word count, of course. But try to aim for at least 90 words, and not more than 110 — this seems to work for most of the students I tutor.

This may be the first question that entered your mind when you saw the title of today’s blog post. It’s easy to see your word count when you practice TOEFL Writing — most word processing programs have a word counter built in and there are websites that will also count your words for you.

But how on earth can you keep track of your word count when you speak? I’m glad you asked that question, on your side of this imaginary conversation. 😉

Once you’ve written a script for your TOEFL Speaking response, check the number of words in your script. You can do this using the word count function in Microsoft Word, or in a free Word substitute such as OpenOffice or LibreOffice. You can also check your word count on the Internet, through sites like Word Counter.

When most of my students try this, they usually find that their word count is well over the 110 limit. It’s common for students to have a pretty high word count in their first “script” of a TOEFL Speaking response.

Once you’ve created a response that’s too long, you can build TOEFL Speaking skills by editing the response to make it shorter. The trick here is to find the words or details that are unimportant or unnecessary. There is always a way to get your word count into the desired 90-100 word range.

This mental skill — eliminating inessential language — is useful for both writing and speaking. With enough practice, you’ll eventually learn to mentally shorten your TOEFL Integrated Speaking responses, without having to write them down in full. With practice, you’ll learn what 100 spoken words feels like to the point where you can give a TOEFL Speaking response of the proper length after only writing some simple notes.

To show you how this works, I’m going to give you a TOEFL Speaking Task 5 response script written by a Magoosh TOEFL student that I’ve also been tutoring one on one through iTalki. First I’ll show you the student’s rough draft of his script, which was overly long. Then I’ll walk you through the student’s process of shortening his response.

Note: This response is based on TOEFL Speaking Task 5 from the first exam in Official TOEFL iBT Tests, Volume 1. While Task 5 is no longer part of the new 2019 TOEFL, the word-counting and editing skills can still be very useful for Tasks 2, 4, and 4 of the current exam.

The male student’s problem is that he has left his course schedule at his dorm, and he does not know where the classroom number is for his psychology class. The woman at the information desk gives him two solutions.

First he might check out a computer in the neighboring building and search but the student said that he could be late to do so.

The second option, says the woman, since psychology class is in one of three big lecture halls in her building, he might check out easily each floor in the building, where there is only big hall each.  But the man said that because it is his first time for the class and meeting the professor,  it will be an embarrassing moment to look inside each class and find his class.

I prefer the first solution because even though he is already late for the psychology class, he can simply search in university computer to find out, and even can get the whole day schedule which he is already missing. Also, when by locating the class by computer he does not need to ask anybody where the class is and there will be less confusion and embarrassment for him. I do not like the second class, because searching three big hall one by one is very confusing and odd to do.

The Process for Revising and Shortening a TOEFL Speaking Response Script

The Task 5 response script you see above is 225 words long. This is more than more than twice the 110 word maximum.  The student and I decided to come up with some rules that could help him shorten any overly-long TOEFL Speaking response, including this one. To develop good mental habits and stay in that 90-110 word count, this student and I came up with a few rules:

Now, let’s look at the revisions my student made using those four rules:

The male student doesn’t have his class schedule, so he doesn’t know the room number of his psychology class. A woman suggests two solutions to him.

First, he could check his schedule in the student center, but that could cause him to be late.

Second, the psychology class is always held in a large lecture hall. He could check each big hall in the building, but that could be embarrassing.

I prefer the first solution because even if he’s a little late, the university computer will have the answer, and he could check his whole schedule. Also, he could locate his class without having to talk to anyone or be embarrassed.

If you read the five rules for simplicity carefully, you’ll understand the decisions my student made as he revised his response.

There are a few other important things you should note. First, notice that the revision has 111 words. Yes, this is — strictly speaking — more than the 110 word maximum that I recommend. But the 90-110 word range isn’t an absolute rule. This word range rule can’t be followed perfectly, because the eventual goal is to simply speak with the right amount of words. And there are no accurate word counting programs or websites for speech. (And even if someone develops such a program, you won’t be able to use it in the TOEFL testing center.)

Second, notice that reducing word count has quite a few extra benefits, besides allowing you to speak more slowly and clearly. When my student reduced his word count, he also simplified his grammar. This eliminated some of his more awkward grammar constructions. More importantly, by getting rid of unnecessary details, my student got rid of an incorrect detail. The woman in the conversation was just another student, not an information desk worker. A factual error like that can really hurt your score on TOEFL Integrated Speaking. By avoiding unnecessary details, you give yourself fewer chances to get the details wrong.

I should also emphasize that this word-reduction strategy is designed for test-takers who have trouble speaking English  understandably at a fast pace. Many TOEFL students fall into this category. But if you are able to speak at a faster, native-like pace and still be understood, you may not need to follow the 100-word rule in TOEFL Integrated Speaking.