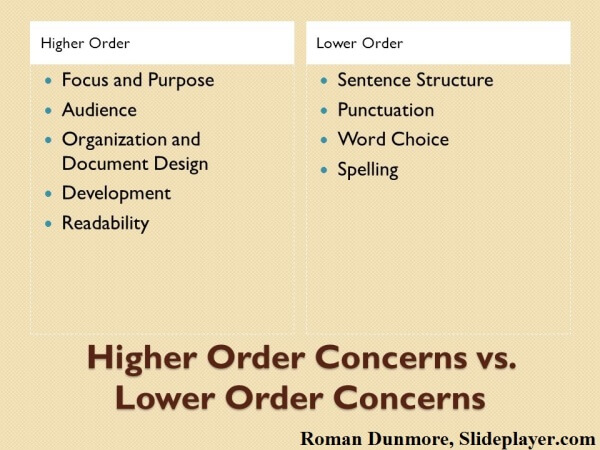 Many college and TOEFL writing resources will talk about concerns in the writing process. “Concerns” set the priorities for writing. In tutorials for any kind of writing, you’ll often read about “higher order concerns” (sometimes called HOCs), and “lower order concerns” (or LOCs).

The difference between “higher” and “lower” writing priorities

HOCs are “higher” because they have a higher level of importance. These more important elements of writing include paragraph and essay organization, introduction, and conclusion. Correct information and a valid argument are also top concerns.

LOCs are lower, dealing with less important details. LOCs may include spelling, grammar, punctuation, sentence structure, word choice… you get the idea. LOCs are smaller and easier to quickly correct.

Which concerns you should deal with first

When you’re revising a piece of writing, it’s tempting to fix all the LOCs first. They’re so easy to correct that writers often want to get them out of the way before dealing with HOCs. This approach is a mistake.

If you revise the LOC areas first, you could waste a lot of time. This is because making changes to high priority aspects of your writing– whole-essay structure, introductions, conclusions, that sort of thing– may cause you to completely rewrite or delete large parts of your original content.

Suppose you start with the LOCs and make a whole bunch of revisions to spelling, grammar, etc… in a paragraph. Once you do some HOC revisions, you could realize that  the paragraph actually doesn’t work well in your essay as a whole. From there you may have to delete the paragraph or completely re-write it.  And then all those little corrections you made just go away– they were a waste of time, because you were making corrections to a piece of writing you didn’t ultimately use.

So most of the time, you’ll want to revise any academic essay based on the HOCs first, and then go back to make “lower” corrections.

There’s another huge reason to deal with the HOCs first in your TOEFL Writing tasks– scoring! If you read the official score guides for TOEFL Writing, you’ll see that higher order concerns dominate your Writing score in terms of weight. LOCs have much less impact on your score. In fact, it’s even possible to get a full five points on a writing assignment with some LOC errors.

In official score guides, note that lower order concerns only start to hurt a test-taker’s TOEFL Writing score if the lower priority errors become bad enough to affect the higher priority aspects of writing. If smaller errors create a “lapse in clarity or the connection of ideas” or are so bad they make a piece of writing hard to understand, then the LOCs can hurt your score.

By prioritizing your time in this way, you can make sure that you’re able to work on the top priorities– which have the biggest impact on your score– before the clock runs out.