If you’re planning on taking the ACT, you might have some anxiety about the questions you’ll encounter. How hard will they be? What are some of the most difficult ACT questions like?

In our experience, students find that some of the most difficult ACT questions take several steps to solve.

In Math, problems can always be broken down into a series of simpler calculations, but it may be hard to see how right away. For English, more difficult problems function in a similar way: you have to pinpoint which concepts are being tested first. On the Science test, multiple data sources and information overload make problems more challenging. In Reading, questions asking for inferences from information given—but not directly stated— in the text can be particularly tough.

Ready to put yourself to the test? Below, you’ll find ten of the hardest questions in Magoosh’s Online ACT Prep. If you can get all of them right, well, then maybe you should be brushing up for that perfect score, little Mr./Ms. Perfect!

(If you want a hint or get stuck on any of the questions, leave us a comment; we’re happy to point you in the right direction!)

have to be so that

2. Region Q, shown in the figure, is defined by What is the approximate area of Region Q in square units?

3. In what region of the unit circle is cos

Throughout the following winters, until his death in 1931, Bentley would go on to capture over 5,000 snowflakes, or more correctly, snow crystals on film. Despite the fact that he rarely left Jericho, thousands of Americans knew him as “The Snowflake Man” or simply “Snowflake Bentley.”

On the morning of November 14, 1889, John Brisben Walker, the wealthy publisher of The Cosmopolitan, boarded a New Jersey ferry bound for New York City. Like many other New Yorkers, he was carrying a copy of The World, the most widely read and influential newspaper of the time. A front-page story announced that Nellie Bly, The World’s star investigative reporter, was about to undertake the most sensational adventure of her career, an attempt to go around the world faster than anyone ever had before. Sixteen years earlier, in his popular novel, Around the World in Eighty Days, Jules Verne had imagined that such a trip could be accomplished in the time stated in the title. Nellie Bly hoped to do the trip in seventy-five days.

5. If the writer were to delete the underlined sentence, the paragraph would primarily lose:

A. important context for understanding information presented afterwards in the paragraph.
B. an unrelated detail describing literature of the late 19th century.
C. scientific data explaining the minimum length of a trip around the world.
D. an indication that a trip around the world in less than eighty days could only occur in fiction, not reality.

Prior to the invention of the camera, people might expect that their portrait would only be recorded once, maybe twice, in they’re lifetime.

In a simple DC electrical circuit, a battery provides a change in voltage (V) that induces an electric current (I) through the circuit. A conductor placed in the circuit is characterized by its resistance (R) to this flow of electric charge. The relationship between voltage, current, and resistance is known as Ohm’s Law, which is represented by the following formula:

A student performed a series of experiments with a simple circuit to test Ohm’s law. Measurements of current were taken using an ammeter. The circuit diagram is presented in Figure 1.

The student set up a simple circuit consisting of a battery and a single resistor. The resistor was taken from an electronics kit and wired into the circuit. Using an ammeter, the student measured current in the circuit for batteries of three different voltages and recorded the results in Table 1. Using the same circuit as in the previous experiment, the student tried three different resistors. The current flowing through the circuit with each resistor was measured with an ammeter, and recorded in Table 2. 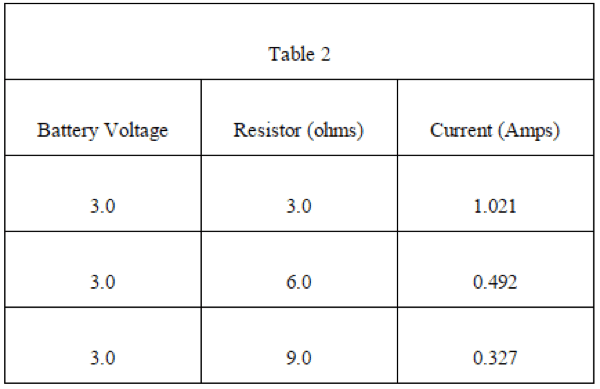 7. The student rewired the circuit used in Experiment 2 by adding another resistor in parallel, as shown in the following figure:

Upon repeating Experiment 2 using this setup, the student observed that the current flowing through two equivalent resistors (R1= R2) in parallel was the same as that which would flow through just one resistor of half the resistance value in a series circuit. Based on Table 2 and Figure 2, when this circuit was wired with two 3.0-ohm resistors, the current reading produced approximately which of the following values?

A water mass is a volume of seawater with distinct properties based on where it originates. The density of a water mass varies as a function of both salinity (in parts per thousand: ‰) and temperature (°C). The amount of salt dissolved in water increases its density. Water masses of lower temperature are also of higher density. Oceanographers use these properties to identify and trace water masses in the ocean. Figure 1 shows variations in the density (D) of water masses in (Figure 1 adapted from this site.)

8. The average temperature and salinity of the Atlantic Ocean are 3.7°C and 34.8‰. Based on the information provided in Figure 1, seawater at 12.0°C and 37.2‰ salinity flowing from the Mediterranean Sea into the Atlantic would most likely:

When Justin finally walked through the doorway of his house, exhaustion beckoned him toward his bed. He labored up the stairs and lay on top of smooth blankets. His wife had heard him enter. She slipped into the room after him and sat at the foot of the bed, looking at him sympathetically. There was so much to say. He hesitated to begin speaking.

Rebecca mistook his discomfort for part of his exhaustion. “It was a long day for you,” she said. “I’m sorry. You must be worn through. Can I get you anything? Some tea or a sleeping pill?” Rebecca always offered sleeping pills, hoping they would make sleep more effective for her husband. She knew as well as he did that they had never done any good, but she made the offer to stave off helplessness. It was the closest she could come to actually relieving his pain.

“‘Fatigue unrelieved by sleep,'” he quoted from the list of symptoms.

“But, dear, you are cured. Dr. Philips administered the full course of antibiotics, and your blood work is free from the bacteria. You don’t have Lyme disease, anymore. Dr. Philips told us.”

That was his cue to begin. With a deep breath, Justin announced calmly, “I had coffee with that health-food store owner, today. Clark.”

Rebecca pursed her lips until they vanished. They always disappeared when she grew upset, leaving only a black line across the space where they usually smirked. “Why would you do that? Dr. Philips warned you about them. Right from the start, he warned you. You’re asking for trouble.”

It was true. Dr. Philips had told him this months ago. Back then, Justin feared what these symptoms meant. The exhaustion that threatened every aspect of his life. The ceaseless ache in every joint. The strange, burning feeling of his skin. Justin waited in a gown that stuck to the piece of wrinkled paper that covered the examination seat. The doctor had performed a battery of tests, and Rebecca sat up attentively as he reentered the office. Dr. Philips glanced over a clipboard showing the test results, saying, “I have good news. You haven’t contracted a serious disease but only suffered a tick bite. You have Lyme disease, but we are fortunate to have caught the disease early. You must have been to Connecticut, lately, since we do not have Lyme disease-infected ticks around here. We will be able to eliminate it easily. Three weeks of doxycycline will eliminate every trace of the B. Burgdorferi. However, let me warn you; as little danger as you face from the disease, you are in a different type of great danger from people who target Lyme patients.”

The doctor nodded thoughtfully as he looked back over the chart. It was Rebecca who finally asked, “What sort of people?”

“Oh. There is an underground cult of alternative medicine cultists who want to sell products to people with Lyme disease. These cultists claim that the medical field lacks a true understanding of the disease, and that Lyme — which is truly very easily eliminated — continues to affect patients for years after the antibiotic rounds are complete. They say that Lyme can be caught anywhere. Be on your guard: avoid these people. In a few weeks, I will have eliminated your Lyme disease.”

Now, a few months later, Justin sat exhausted on his bed. Dr. Philips had just given him a clean bill of health and congratulated him on being perfectly well. Justin had tried to protest that the symptoms remained, but the doctor assured him the treatment had eliminated every trace of Lyme disease. Justin felt his bones shiver as he leaned back on the pillows. He had made his decision, but his energy was spent. He wished he had the vigor to convince his wife of the conclusion he had reached.

Rebecca shook her head. “Did he try to get you to buy something? Did he turn you against your doctor? Throw around alternative remedies?”

“He suffered from Lyme before. For years. He knows what he’s talking about,” Justin pled. He had gone over the words for this conversation again and again throughout the day. He thought he was prepared, but the fatigue left him so dry and frail. His purpose leaked away, and his thinking grew lethargic. He had an inkling of doubt. Perhaps this was why he had finally consulted an alternative medicine nut; his exhaustion left him vulnerable to suggestion. Still, Clark had been sick for years during his childhood in Oregon. He knew dozens who had all over the country, and who felt better now, after Tai Chi or Rife machines or acupuncture. A few months ago, Justin would never have bought into it, but what he was hearing was exactly what he was experiencing, and the doctor’s story was not holding up under the pressure of reality.

“How do you know he really had it? You’re trusting a man you’ve never met before. That’s no proof. What did he tell you to use?” Rebecca pressed. “Bizarre sound wave machines, like the doctor said? Listen, Justin, you don’t have Lyme. The doctor told you that you don’t have Lyme. Why are you falling right into the trap he warned us about at the beginning? Of all times, now that you’re cured!”

All Justin could manage to say was, “Because we have never been to Connecticut, Rebecca. And because I feel so tired.”

9. According to the passage, all of the following were aspects of Justin’s illness EXCEPT:

10. It can be reasonably inferred from the final paragraph of the passage that:

A. Justin feels unable to travel because of his illness.
B. Clark was as powerless to help Justin as Dr. Philips.
C. Dr. Philips was misinformed about where Lyme disease could be contracted.
D. Justin was misdiagnosed with Lyme disease.

Answers below!! This is your warning before you scroll! 🙂