Home › MAT Basics › What is an MAT analogy?
By Bertrand on September 2, 2016 in MAT Basics

Analogies used to be a common feature on standardized testing, but they have largely been removed in recent years. Some students interested in the MAT may be wondering, “what is an MAT analogy?” Let’s take a look at what makes a statement an analogy.

What is an analogy?

I’ll stick closely to what the MAT describes as an analogy in both the official study guide and the candidate information booklet.

Analogies on the MAT 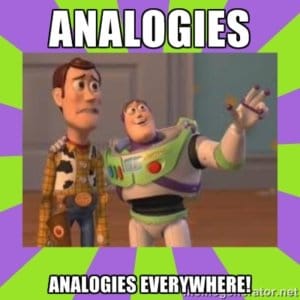 On the MAT, analogies will correspond to the above equation form, but–instead of being complete–one of the terms will be missing; here is an example:

Presented with an analogy like the above, it will be up to you to discern which two of the three terms are related, forming a relationship pair. With the “A : B :: C : D” rules in mind, we know that the above must conform to one of the following:

For more information on analogies, be sure to read through the official study guide, the candidate information booklet, and the Magoosh MAT blog!

Bertrand is a remote tutor and a MAT blogger for Magoosh. He received a B.A. from Fairleigh Dickinson University and studied education theory at Rutgers Graduate School of Education. He has been studying and working in education since 2010. Born and raised in New Jersey, he now resides in Philadelphia. When he isn’t helping students study or writing blogs for Magoosh, he spends his time practicing mixed martial arts and reading as much as his schedule permits.
Previous
Next