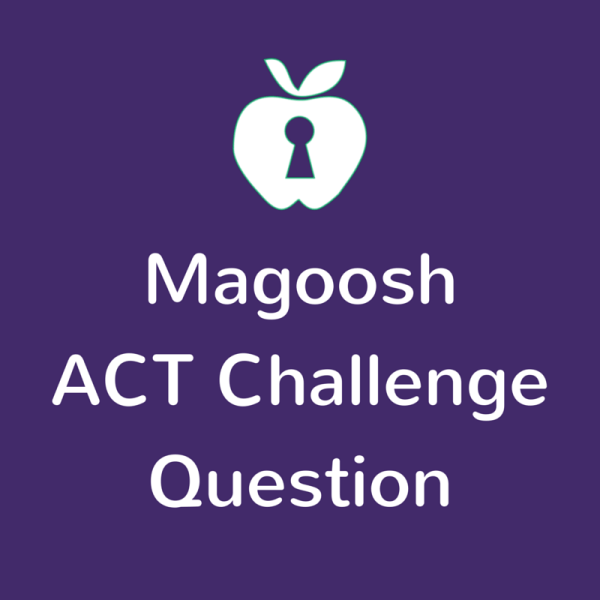 What makes hard ACT English problems so hard? If you read a lot of the ACT guides out there, it sounds like you can just memorize a series of grammar rules and be good to go. Unfortunately, this isn’t actually the case! The ACT tests grammar and usage in many different ways, and some of the hardest problems will have distractors that wrong in really subtle ways.

But that doesn’t mean you can’t get these points! All it means is that you need some really top-quality practice with the types of problems that trip students up the most. Luckily for you, we’ve compiled eight ACT challenge problems for the English section below.

Want to make sure you’ve mastered the trickiest concepts in all areas? For ACT challenge problems from other ACT sections, check out:

Kendra Michelson helped establish art as an important mode of learning in the city’s struggling schools. She taught local artists the strategies they needed to help children as young as five become bourgeoning artists who could then apply this creativity to their other subjects. Today, there are more than seven thousand (1) artists-in-residence around, all of (2) which teach classes to underprivileged students in school-based art studios.

1.
A. NO CHANGE
B. adults and children creating art,
C. artist-teachers,
D. DELETE the underlined portion

3. The nickname “Mama Pop” was conferred on my aunt by fans of her famous soda shop. She herself, adopted the moniker, and, like a true mother to the community, embraced all of the associations that came along with it.

4. As the daughter of one of Charleston’s leading judges, Angelina Grimke could have looked forward to a life of luxury and ease, and her comfort assured by the presence of slaves trained to respond to her wishes.

5. Acclaimed novelist Toni Morrison likens memory to the way the Mississippi River, and other rivers like it, years after being straightened and pushed into levees by the Army Corps of Engineers, still strain at times to flood its banks and revisit the original, meandering route.

A. NO CHANGE
B. strains
C. strained
D. straining

6. Mario Lanza himself claimed Enrico Caruso as his greatest influence and infamously played him on screen, reminding a wider audience that there was nothing incompatible between classical tenors and genuine popularity.

7. Fallingwater, one of the most famous examples of organic architecture, was designed by Frank Lloyd Wright. The family had given him free reign to construct their house on any location on their extensive land. Wright made the bold decision to place the house over a waterfall on the site. He then designed a house with many horizontal stones the same color as the rocks found in the surrounding area. This design structure allowed the house to blend in with its surroundings, looking almost as if it were made by nature rather than a human.

Which of the following true statements would best introduce the paragraph?

8. It all began in mid-March when a peddler from Halifax named John Law had a frightening encounter with a poor young woman, Alizon Device in a field, near the town of Colne.

1. ANSWER: C
Answer choice C is correct because it states the noun in the clearest way possible. These are “artist-teachers” (artists turned into teachers) who have been created by Michelson. If this artificially constructed compound noun sounds awkward to you, then you need to work by process of elimination with the other answer choices. Each of them has a flaw that guarantees that it isn’t the right answer!

Answer choice A is incorrect because of the colloquial use of the word “around.” Although this is an expression we might use when casually speaking, on the ACT, we always want to use academic English.

Answer choice D is incorrect mostly because it deletes the comma that is necessary to set off the subsequent modifier, but also because it is slightly unclear who the “seven thousand” is referring to if the noun is deleted.

2. ANSWER: F
We can eliminate E because “which” is a pronoun that refers to things not people, and the pronoun here is referring to the artists. We can eliminate H because if we use the subject pronoun “them” then we are creating a comma splice.

Many students who struggle with this question are thinking about the rules for appositives. As a reminder, an appositive is a noun or a noun phrase that renames or defines another noun, such as “My uncle, a master chef,” or “Maya Angelou, a Pulitzer Prize nominee,”. Appositives are often set off by commas. However, if the appositive is essential to either the meaning or the structure of a sentence, it should NOT be set off by commas.

But in this case, “herself” is not exactly an appositive, it is a reflexive pronoun acting as an intensifier. When a reflexive pronoun such as “herself” is used like this, it is not set off with commas. For example, “I myself wouldn’t buy that book.” This makes answer choice C incorrect. Answer choices A and D are also incorrect because they put a single comma between the subject and its verb, which should never happen. Be particularly careful with D. This could be an option if it didn’t have a comma after she (After all, the word “herself” is not really needed in this sentence, and it would be more concise to just say “she”) but the comma makes it wrong. So, once again, because reflexive pronouns acting as intensifiers are not set off by commas, the correct answer is B.

This one is tricky because of the complex structure of the sentence. The subject is “Mississippi River,” which is singular. There are two bits of parenthetical information in the middle: “and other rivers like it” and “years after being straightened and pushed into levees by the Army Corps of Engineers.” Remember, parenthetical information set off by commas can always be bracketed off so you can focus on the main part of the sentence (which should still read correctly without it). If you do this, we have:

Acclaimed novelist Toni Morrison likens memory to the way the Mississippi River, [and other rivers like it, years after being straightened and pushed into levees by the Army Corps of Engineers,] still strain at times to flood its banks and revisit the original, meandering route.

This makes it easier to see that our subject is Mississippi River. There is also a clue later in the sentence when the pronoun “it” is used. Now, we need to make sure the verb tense is correct. The word “still” before the verb indicates that we need present tense, so our answer is B.

In this case, there is no need to set off the pronoun “himself” with commas. In this case, it is acting as what is called an intensifier: “Lanza himself.” So, in a sense, we can assume it is “essential” to the sentence because the author is purposely choosing to use it, so it should not be set off with commas. This is a tricky one, but the ACT has tested it, so good to know!

Often on topic sentence questions on the ACT English test, you’ll find that the correct answer is simply the one that best summarizes the content of the entire paragraph. And typically, some wrong answer choices will be waaaaay obvious: either they will be too narrow or too broad or they will be completely off-topic. In this case, all four of our answer choices are on the same topic, so how do you decide? The key is noticing what information appears in the next sentence. The second sentence begins with a reference to “the family” and to “him,” which means that both of these details need to be clarified in the first sentence. The only answer choice that mentions both “him” (Frank Lloyd Wright) and “the family” (a Pennsylvanian family) is answer choice B.

8. ANSWER: F.
In this case, “Alizon Device” describes “the poor young woman” and as such, needs to be set of as an appositive with commas (eliminating G and H). We do not want to include “in a field” in the appositive. She is still Alizon Device even when she is not in a field! So this eliminates E.