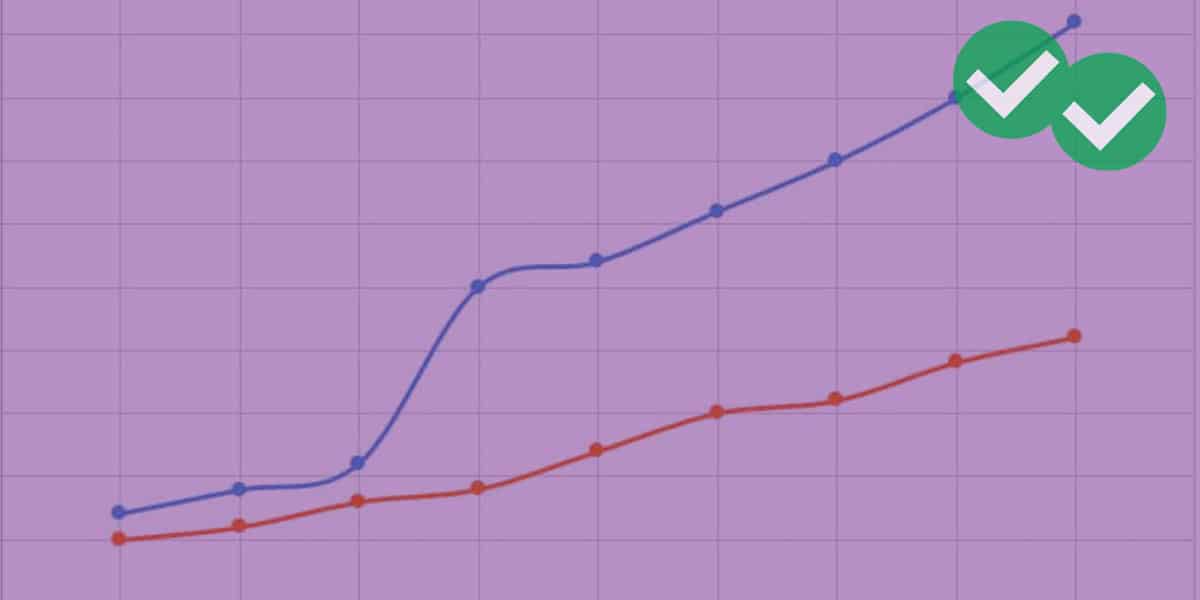 On GRE test day, you will have two Quant sections, each of which will include a data interpretation set. If you’re not sure what this entails or you just want to get some GRE math practice in, keep reading for our breakdown and practice problems.

Data Interpretation on the GRE Quant

Why is there Data Interpretation on the GRE?  Why is this important?  Well, do you know the old adage “A picture is worth a thousand words“?  Well, a graph is worth even more.  Geeky math & techie folks, such as I, absolutely love graphs and charts, because they present an efficient means to convey a truckload of information in way that is directly visually accessible.  In our post-modern electronic world, the sheer amount of information available is simply mind-boggling.  Graphs and charts are essential for keeping track of all this information.

Here’s one big suggestion for GRE Data Interpretation: if you are not a geeky math or techie person, start looking at graphs & charts.  Look in the financial news, in scientific articles, and in international news in general.  Most newspapers and news magazines are stuffed to the guppers with graphs & charts.  Spend time studying them: each graph, each chart, has a “story” to tell.  Spend enough time with each to understand its “story.”

Despite appearances, the GRE Data Interpretation questions are usually relatively easy compared to the rest of the questions on the Quant section.  The whole point of graphs is to make information easy to see!

What You Need to Know for GRE Data Interpretation

The GRE Data Interpretation will present information in any one of a number of visual formats.  These include:

(f) histograms (which are different from bar charts!!)

Of these, pie charts and line charts and charts of numerical data are probably self-explanatory, and there are examples below (pie chart & bar chart in Set #1, line chart in Set #2).  Scatterplots and boxplots are somewhat less well-known, and each has its own blog giving more detail; there’s also an example of a scatterplot below, in Set #4.

I will say a few words here about bar charts vs. histograms.  First of all, on a bar chart, there’s no particularly important difference whether the bars go horizontal or vertical (a.k.a. a “column” chart); this choice is more a matter of artistic preference in display, but it’s not meaningful for the data.  In a bar chart, each bar represents a different item or group.  The scale of some numerical variable is parallel to the bars, and the purpose of the graph is to compare the numerical values of the elements represented by different bars. For example, in this bar chart, each bar is a particular continent, and the length of the bar, measured against the horizontal scale, indicates the area of the continents.  For example, this bar chart indicates that Africa has considerably more area than North America, a conclusion not self-evident from a Mercator Projection map of the world.

If we want to show more complicated data, we might use segmented bars or side-by-side bars.  You can read this GMAT post about this distinction.  Set #3 below uses segmented bars.

A histogram is a chart that happens to use columns, but it is not a bar chart.  On a true bar chart, each bar is a different element, and the scale is parallel to the bars.  By contrast, on a histogram, the scale is perpendicular to the columns, and each column represents a particular range of the data.   For an example, see the post on histograms.  While the difference between a bar chart and a histogram is something that probably will be obvious from the problem set-up, this is an important distinction to understand for GRE Data Interpretation.

Try some GRE Data Interpretation practice to get an idea of what you can expect on test day. 1) What is the dollar amount of sales of canned goods in the first quarter of last year?

2) Frozen prepared meals constitute what percentage of the total sales for the first quarter last year?

The following graph shows the total revenues and total costs of QN Corporation, a publicly traded company, over the span 2007-2015.  Recall that, for any year, profit = (revenue) – (cost). 4) In 2013, the dollar amount of the profit at QN Corporation was approximately which of the following?

5) From 2010 to 2015, revenue at QN Corporation increased by approximately what percent?

6) From 2009 to 2010, profit at QN Corporation increased by approximately what percent?

The following chart shows the employee breakdown, number of marketer vs. number of programmers, at six similarly sized companies in a particular internet market.  All six have similar sized management teams that are not displayed: all the non-management employees are displayed. 7) At Pindar, there are approximately how many more programmers than marketers?

8) At Jericho, approximately what percent of the non-management employees are marketers?

9) If were to take the average number of marketers at five of the companies, excluding Fermion, then this average would be approximately how many employees larger than if Fermion were included in the average?

Fifteen college seniors, none of whom took any math classes in college, were selected for a clinical trial.  An online GRE Math Course was made available to them, and these students were allowed to study for however many hours they wanted.  Then, each took the GRE for their first time.  The graph below records how many hours each student studied, using the online material, and that student’s GRE Quant score.   The best-fit line model shows the best prediction, given such a student’s hours of study, of what her GRE Q score might be. 10) Among the students in this trial who studied less than 25 hours, what is the highest GRE Quant score achieved?

11) For the students in this trial with the three highest scores, approximately what is the average number of hours they spend studying?

12) Among the students in this trial who studied for 20 hours or more, what fraction of them performed worse than expected, according to the best-fit line model?  Express your answer as a fraction. Because the answers are relatively close, this is a rare problem on which it’s perfectly fine to use the calculator.

Fermion has only 18 marketers.  That’s a gap of 33 below the average of the other five.  If we included Fermion, this gap of 33 would be divided six ways among the companies, so the new average would be 33/6 less than the original average.  That’s a drop of 33/6 = 5.5, which is close to 6.

Trivia about the names of the companies in this set (you don’t need to know this for the GRE!)  Terrene is an archaic English word, long out of use, meaning “of the earth, worldly.”  Yes, Chris Lele would know this word!  Endor & Jericho are from the Bible.  In the first book of Samuel, Saul visits the witch of Endor and it doesn’t turn out well for him; this name, “Endor,” was borrowed by George Lucas for the forest moon in Return of the Jedi.   Jericho, one of the oldest cities in the worlds, was a mentioned in the both the Hebrew Bible and the New Testament: the walls of Jericho fell to Joshua, and much later, a man traveling to Jericho was beset by thieves and then cared for by the Good Samaritan.  Pindar (522 – 433 BCE) was a real person, an Ancient Greek poet.  Diomedes was a hero in Greek mythology who was said to have fought in the Trojan War.   A fermion, named for physicist Enrico Fermi (1901 – 1954) is a subatomic particle with half-integer spin: the three constituents of the atom (protons, neutrons, electrons) are all fermions; quarks are fermions as well.

10) For this problem, we just have to look in the correct region of the graph. We ignore all the points that are at 25 hours studied and more: that’s the point on the vertical 25-hour line and all the points to the right—all of those are ignored.  The only ones we care about are the ones less than 25-hours.  Of these, the highest is the one furthest to the right, at a height of 154.  This person studied less than 25 hours and got a GRE Q score of 154. The gray dots on the left are out, because those are times less than 20 hours.  Of the remaining dots, the 7 green dots are above the line and 3 red dots are below the line.  Ten dots altogether are above the 20-hour line, and 3/10 performed worse than expected.

Ready to test your skills? Try Magoosh’s GRE math practice questions with answers and explanations! And to find out where algebra sits in the “big picture” of GRE Quant, and what other Quant concepts you should study, check out our post entitled:

What Kind of Math is on the GRE? Breakdown of Quant Concepts by Frequency

Editor’s Note: This post was originally published in April, 2012, and has been updated for freshness, accuracy, and comprehensiveness.