MIT is a world-renowned engineering university, and you’ll find that prominence bleeding into its MBA program. About 33% of the 2017 incoming class has an undergraduate degree in engineering, and that’s not including the math and science majors. If you include math and science, more commonly known as STEM, you’ll find that group makes up 47% of Sloan’s class. 47%! That is significantly higher than other top programs. STEM majors make up 39% of Stanford’s class, 36% of Harvard’s, and 25% at Wharton’s. What does this mean for your application? If you aren’t coming from a STEM background, you want to make sure you find a way to prove that you’ll be able to keep up with all the other quants in class. And the GMAT is one way to do so.

Sloan’s average GMAT score for the class of 2017 is 716, which is a 3-point increase from the class of 2016. The middle 80% is 670-760, which is wider than Harvard’s and Wharton’s, but narrower than Booth’s and Stanford’s. This means that while you do have some wiggle room, your exception story and essays may not be enough to overcome your 620. Also, as you study for the GMAT and set your goals and expectations, keep in mind that you don’t want your score to be completely dominated by the verbal section. Aim to score in the 80th-percentile in the quant section. This will demonstrate that you can also play ball in your Data, Models, and Decisions class.

The safe zone: 730-800. Scoring on the low end of this range puts you comfortably higher than the average of 716, which is where you want to be. Of course, this is assuming that your work experience, GPA, resume and recommendations are also in line with the Sloan averages. Don’t forget that your numbers alone won’t be enough to get you in. Your story, your values and your future goals also need to be a good fit.

The “in the running zone”: 700-730. Scoring in this range definitely still gives you a solid chance with adcom, but other aspects of your application (work experience, GPA, resume, recommendations, essays) will need to be very impressive and/or diverse.

The RARE exception zone: 600-650. There are going to be very very few exceptions in this range, but not many at all. You need to be a real superstar and your uniqueness factor has to be an 11 out of 10 to be accepted if you fall in this range. 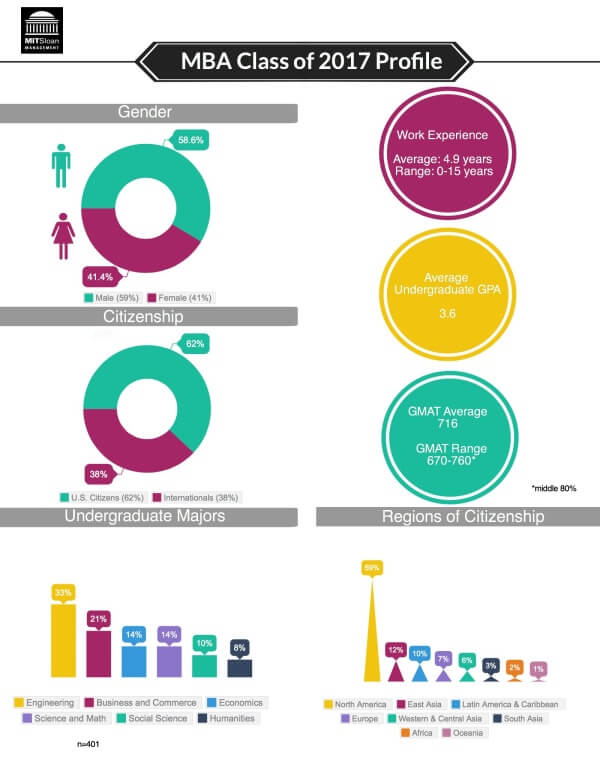 Jen is here to do everything in her power to help you ace the GMAT. She is a graduate from the University of Virginia, with a major in Economics and a minor in UVA Men’s Basketball. She is a certified yoga teacher, the world’s laziest runner, and likes to experiment with vegan cooking (it’s really not as gross as it sounds).
Previous
Next