The following is a true story about a few blithe Magooshers who went skydiving together last weekend.

“What? Blithe?” You may be thinking. “That’s no ordinary adjective!” And you’d be right. It’s one of the many vocabulary words you’ll find on the GRE, SAT, and throughout the rest of this story. There are 18 of them in here — see if you can find them all! Definitions will be listed at the bottom like this:

Now, as I was saying, a few blithe members of the Magoosh team (namely Mark, Amrita, and myself) decided to jump out of a plane last weekend… About two weeks ago, we posed the idea to the rest of the Magooshers in the office, but they didn’t have to deliberate long before objecting to the proposal. Many had even made the lifelong decision to abjure from skydiving altogether. I mean, understandably so — you have to be a little outlandish to engage in such a deleterious activity. But we were determined to spice up our lives and avoid another lackluster weekend, so we set out on Saturday to dive into the sky.

We all got up in the wee hours of the morning to make the onerous two-hour trip out to the skydiving location in middle-of-nowhere Byron, CA. Feeling exhausted and a bit uneasy on our arrival, we warily assessed the warehouse that doubled as the headquarters for Bay Area Skydiving — a hodgepodge of parachutes, ropes, straps, and helmets strewn about the building. We sat down on some tattered couches in the corner, and after about 500 “initial here”s and “sign there”s, our lives had officially been signed away and a feeling of resignation finally settled in amongst the group.

“I looked up some statistics online,” Amrita told us as we sat in our small circle of nerves and jitters, waiting for them to call our names. “We had a greater chance of dying on the way here.” However, her attempt at hortation was not enough to assuage our fears — let’s not forget we were a mere 15 minutes from leaping into the sky!

Overwhelmed, we almost cowered right there. But members of the staff quickly came to greet us and their sanguine demeanors immediately put us at ease.

“They call me Evil,” my tandem instructor said smiling and gruffly shaking my hand. He was an eccentric guy, to be sure. Sun-bleached hair and tanned, leather skin — he was the poster child for the adrenaline-junkie lifestyle … and the person who would keep me alive to see the end of the day.

But his imperturbable attitude was infectious, and I soon found myself acting just as nonchalantly about the whole endeavour as he — joking and laughing along with the other instructors:

“Everyone I’ve jumped with has survived …. for the most part.”

As we stepped outside on the tarmac and approached the plane, they kept the jokes coming — continuing to ease our nerves, distract us from minatory sound of the whirring and rumbling jets and engines in front of us. We boarded the plane, feeling stoked. 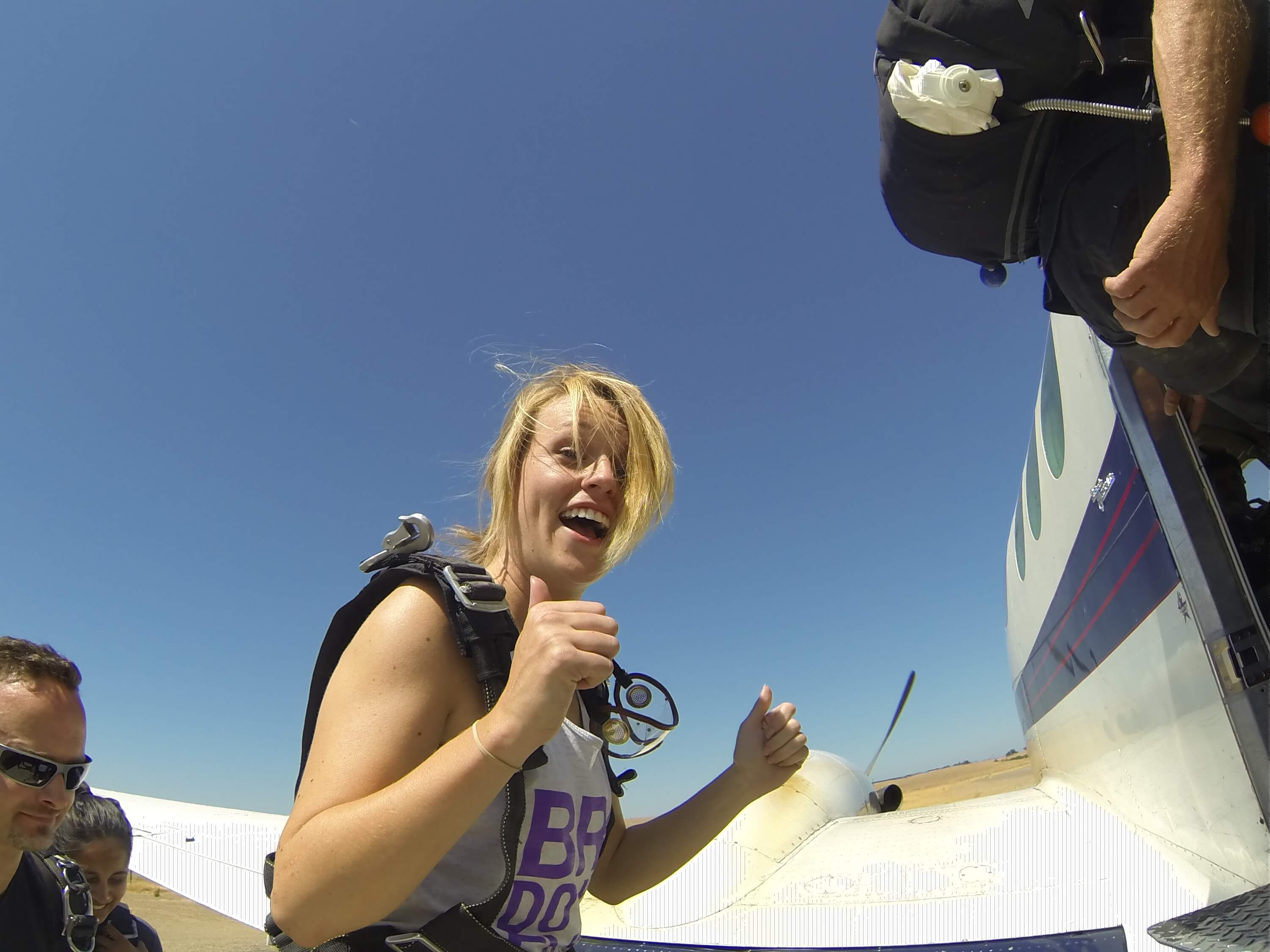 To be honest, the rest is a blur. But somehow we got from here: And all I can tell you is that it. was. awesome.

We survived. We had a blast. And now, I guess you could say Magoosh has got some new pretty hardcore skydiving zealots. 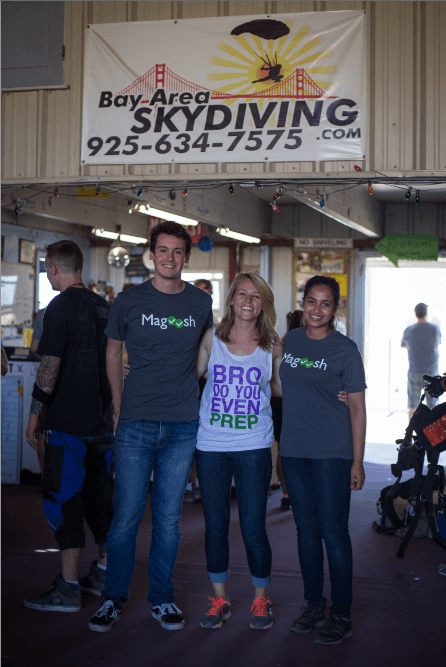 Who wants to go again?

Here are all 18 GRE & SAT vocab words from the story and their definitions from Merriam-Webster! Check to see if you found them all!

1. Deliberate (v.): to think over; to think about and discuss issues carefully

Note: this can also act as an adjective meaning “slow” or “on purpose”!

2. Abjure (v.): to swear off or refrain from something

3. Outlandish (adj.): crazy; bizarre; out of this world

9. Resignation (n.): acceptance of something unpleasant that can’t be avoided

11. Assuage (v.): to relieve or easy pain, other negative feelings

14. Eccentric (adj.): strange or unusual (usually for a person); tending to act in unusual ways