By Maizie Simpson on November 1, 2016 in Education

College rivalries are fierce, especially in the South. But which Southern schools can claim the most alumni in today’s US Congress? And did your own university make the list?

Magoosh analyzed data from every college and university across the US to find out how many current congressmen and women graduated from each. Below is a ranking of Southern schools and colleges that have produced the most members of today’s US congresspersons.

To learn more about the educational backgrounds of current members of Congress, visit Degrees of Red and Blue. 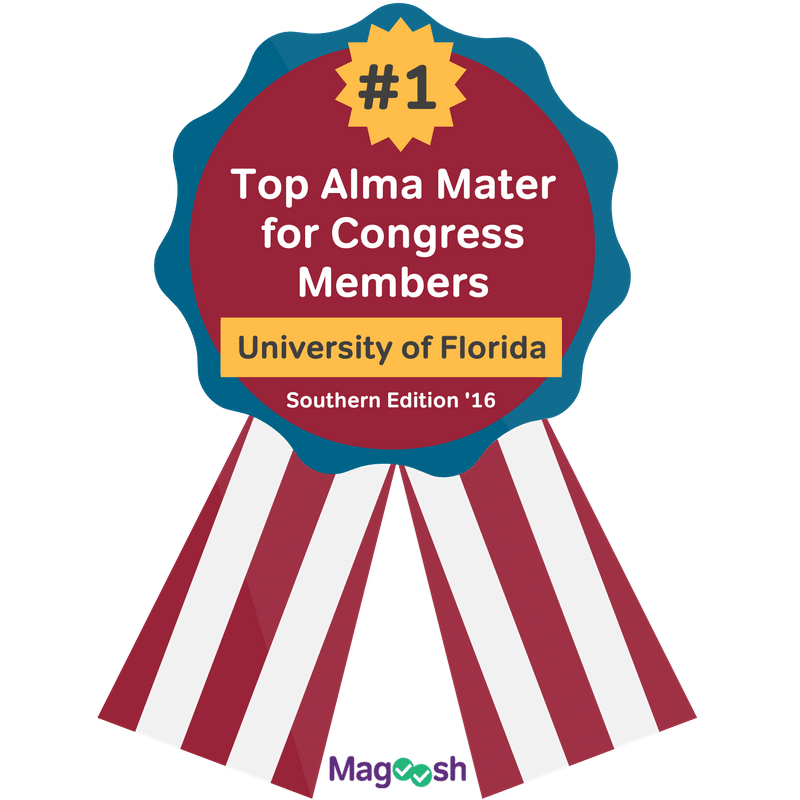 Fun Fact: There are 9 more UVA alums in today’s Congress than VT alums. Something to smack talk about at the next Commonwealth Cup? Fun Fact: UGA doesn’t only produce U.S. politicians. Its list of famous alumni also includes Abd Al-Karim Al-Iryani, the Prime Minister of Yemen from 1998 to 2001. He got his Bachelor’s and Master’s degrees in Agriculture at UGA. (source) Fun Fact: It’s no wonder budding politicians are attracted to this university. UNC is home to Campus Y, a nationally-renowned social justice center founded in 1859. Campus Y is home to many international and service organizations and has consistently been the center of progressive movements within UNC. (source) Fun Fact: These congressmen aren’t the only high-profile law school graduates from University of Mississippi. Legal thriller writer John Grisham also got his J.D. at Ole Miss Law and served as a U.S. Representative for Mississippi from 1984-1990. (source) Fun Fact: Marco Rubio isn’t the only one to come out of UM with presidential dreams. Former president of Perú, Fernando Belaúnde Terry, also attended UM and studied architecture before transferring. (source) Fun Fact: We all know UA churns out a crimson tide of all-star athletes. But did you know the school has also produced more than 40 political activists, attorneys, and national and state politicians? Among the most notable are Maud McLure Kelly, the first woman to practice law in Alabama, and William Brockman Bankhead, former Speaker of the House. (source) Fun Fact: LSU must really trust the governing abilities of its student body. The school’s student government controls $5.5 million a year to do things like support student initiatives and fund the SG Newspaper Initiative that provides free copies of The Advocate, Wall Street Journal, and The New York Times. (source) Fun Fact: These congressmen must have had really stellar SAT scores. Vanderbilt is known as one of the most selective universities in the U.S. In 2016, it only accepted 8.8% of its 28,700 applicants. (source) Fun Fact: Senator Lindsey Graham was the first person in his extended family to attend college. He got both his undergraduate and J.D. at University of South Carolina. (source) Fun Fact: More than half of UK’s alumni still live in Kentucky, including the four congresspersons above. No wonder the Wildcats’ cheering section is always so strong! Fun Fact: UT is one of the oldest public universities in the U.S. and its political roots run deep. In fact, it is the only university in America with three ongoing presidential papers projects — all for presidents from Tennesseee (Andrew Jackson, James K. Polk and Andrew Johnson). (source) Fun Fact: Burr, Edwards and Holding are in some very impressive company as Wake Forest alumni. Among the school’s most famous graduates is world-renowned poet Maya Angelou. (source) Fun Fact: The Cumberland School of Law at Samford University is the the 11th oldest law school in the country. Its graduates include all three representatives above, two U.S. Supreme Court Justices, and Cordell Hull (“the father of the United Nations”). (source) Fun Fact: This university used to be called Liberty Hall, so why is it called Washington and Lee today? 1. Because in 1796, George Washington endowed the school with $20K in stock (which was unheard of at the time); and 2. Because after his defeat in the Civil War, General Robert E. Lee served as the university’s president until his death. (source) Fun Fact:Thanks to its Master’s-to-Ph.D. Bridge Program founded in 2010, Fisk University tops of the list of American schools that award Ph.D.s to underrepresented minorities. (source) Fun Fact: Georgia Tech is no stranger to big-name politicians. More than 100 years ago in 1905, former U.S. President Theodore Roosevelt visited the school’s campus to give a speech on the importance of technological education. After he finished, he took time to shake every single student’s hand.(source)